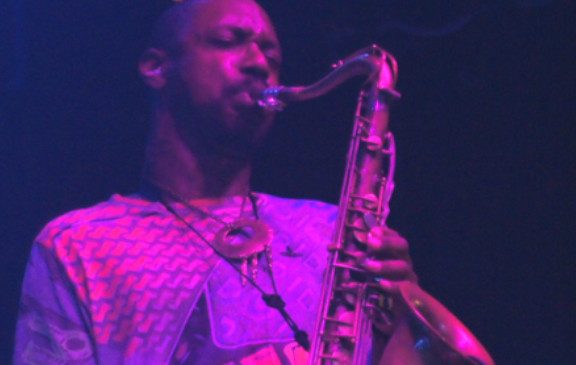 At the intersection of jazz and rave music, lie The Comet Is Coming. A trio of sax, synth and drums, rooted in free-form improvisation, their live show is one part musical exploration, one part pure fury. It’s a crossover that some may find unholy, but one that’s gaining ground in London – defying notions of genre in the process – as a new generation of musicians resolve the sounds of jazz with a youth whose primary point of contact is the club scene. Back in 2010 or 2011 (time sometimes blurs, does it not?) I was on a jolly courtesy of White Nights (the sadly no more arts and culture event that took to the streets, cafes and venues of Brighton in late October), who had an exchange thing going on with their French counterpart in Amiens, France, the idea being that a load of Brighton-based acts would showcase their wares to a French audience. Last on the bill, and in the very early hours of the morning, Soccer 96 took to the stage to a rapidly dwindling audience made up of a few friends and the odd French native. Not only did they instill a second, maybe third wind in me, but they completely blew the roof off with their out-there instrumental jazz, prog, space, punk, dance fusion. It was made by just two people; Dan Leavers (Danalogue) on analogue synths, and Max (Betamax) on drums. It was amazing and brilliant.

A few years later (last year to be more precise), The Comet Is Coming are on the telly, having been nominated for the Mercury Music Prize for their debut album Channel The Spirits. Apart from the band name the only real (but big) difference with Soccer 96 was that they now had the saxophonist Shabaka Hutchings on board, helping to expand their sound in the process but still with that aforementioned fusion at heart. As well as a special Record Store Day release, the Death To The Planet EP, they are hitting the road for a UK tour, as well as a date with Love Supreme festival this summer. So, it was a pleasure to catch up with Dan for the first time since that night in Amiens.