It is the inaugural Brightonsfinest Radio show with Jeff Hemmings and it packs a powerful punch to kick things off. Along with fantastic new tracks from the likes of Ezra Furman, Black Country New Road, Strange Cages and Richard Dawson, there is an exclusive interview with The Murder Capital which takes a look at their fascinating debut album. Unusual band, the Flamingods. From Bahrain, and made up of Kamal Rasool, Charles Prest, Karthik Poduval, and Sam Rowe, for many years they had been beset by visa issues, to the extent that they could hardly make music together as a band, instead getting together for the odd tour and gig, whilst exchanging files over the internet in concocting their heady fusion of upbeat middle eastern psychedelia. Regular visitors to Brighton – they recently performed at Mutations – they have a fourth album Levitation, the first one they have recorded fully as a band, and will be here for this year’s The Great Escape. Kamal took some time out from a band rehearsal to chat about Bahrain, the new album, and being an Exceptional Talent…

After little glimpses of summer sun in Brighton over the last few weeks we’ve been getting excited for the fine weather to come and, following The Great Escape Festival’s announcement of a further 120 artists on Wednesday, we’re now absolutely desperate for festival season to roll around. 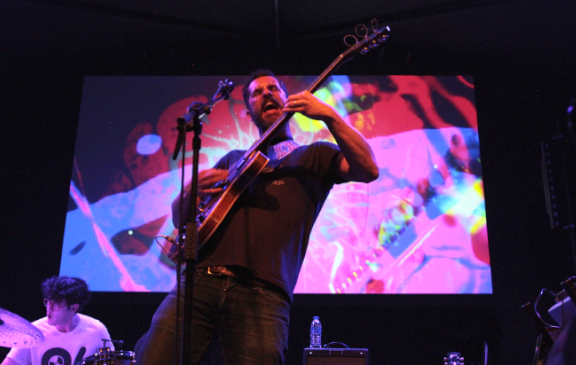 Despite previously appearing back in 2015, the return of Mutations Festival feels like a brand-new festival. Now an all-dayer in a single venue rather than a multi-venue bash, as well as relocating to Portslade’s Hansen Hall and bringing Small Pond on board as co-promoters, it already felt like a whole new thing entirely. As such, there were certainly some teething problems on the day, such as a lack of facilities for such a large number of people, problems with the screens in the main room and, crucially, running out of pints way before its conclusion. However, there was certainly enough promise to keep Mutations alive long enough to become an annual tradition.

THURSDAY
This year I was off-duty from the main Great Escape Festival, leaving it in the capable hands of our growing team of writers and photographers (and writer-photographers), I instead dipped into the free festival which runs alongside the main event every year, taking over any left-over scraps of venues which the behemoth of Europe’s largest new music festival has yet to absorb. In fact, as I found myself involved in three different performances as a musician, I didn’t get too much time to explore but I did see some great bands over the three days nonetheless.

In early June, Flamingods promised a road to self-discovery and adventure with their new album, Majesty. We followed the character ‘Yuka’ and his journey through the mythical world that the LP portrayed. It’s an immersive world of escapism and sensual indulgence and tonight, courtesy of Love Thy Neighbour, Flamingods are allowing The Hope & Ruin to see through their mind’s eye. Who would have previously thought Queens Road, Brighton could have such a magical glow to it?

On their third LP, Flamingods seem to be grappling with their multi-cultural background in an entirely new, captivating fashion, tapping on ideas previously left untouched. The album, which is described by frontman Kamal Rasool as being largely inspired by his time in Dubai, captures the conceptual journey of the character Yuka on his adventure to seek enlightenment; it conflicts light and good with darkness and evil and outlines his adventure through the throws of danger. It is a vast, multi-layered album that brings about rich textures, deep undertones and cascades of instrumentation introduced from the Eastern side of the world.

Released on the infamous Soundway Records, a label dedicated to providing a platform for re-releases of music that may not have graced the Western audience’s ears previously, it brings about a mesh of both their time in London as a band and with each of their individual backgrounds. What can often appear as a gimmick finds an element of sincerity within the piece produced here by Flamingods and, if you have time to listen to it properly, to engage with it in an isolated situation, it’s an album that really puts you in a different mindset for a good hour or so giving you complete escapism. Through instruments sourced from around the world, Sam, Kamal, Charles, Craig and Karthik have put together what is sure to be one of the headiest transcendences into a psychedelic world released this side of 2016. Hold tight, this one runs deep.

You land within ‘Majesty’, the starting point to the journey and a starting point that is chocked full with swelling lucidity, reversed synthesised sounds bubble atop of a mounding drum pattern. Kamal’s vocals hit your ears with severe fervour, giving a descriptive idea of the environments that surround Yuka upon his arrival. It paints the picture with the articulate brush of Da Vinci:

The lyricism is beyond fantastic, packed full of imagery, metaphor and personification; Kamal sells the imagery to you via hazy vocals that generate the weather with the warmth that it grows upon. It grips you from the start, ties your shoelaces and encourages you to depart on the journey with the protagonist, Yuka. If MGMT were the first contemporary artist to have inspired the initial movement of psychedelia influenced by cogent imagery of pastoral landscapes, Flamingods are a certain to exaggerate all that they gave, giving it a new elevated level that far surpasses any understanding we previously held as an audience.

As it progresses into the heady ‘Jungle Birds’, twinkles of the Eastern influences immerse the sound around Kamal’s delicate vocals. Once again, painting pictures of the animal life that surrounds Yuka as he progresses further into the woodlands. ‘Taboo Groves’ makes interesting comments that perhaps refer to the current malaise in Western culture, “Let’s travel East / Leave behind the weights of our society.” The shimmering dance of ‘Taboo Groves’ builds around ethereal soundscapes and washes off various instruments that highlight the cultural roots of Flamingods, based partly in Bahrain and Dubai. It is a combination of the lyrical articulation and musical fluidity that gives such a pleasurable listening experience.

Whether in the dark or light, the album shows prosperity, by the fourth track in you hit the first sense of darkness with ‘Majestic Fruit’. The haunting flute from the start gives the image of impending danger, furthered with glum vocals that resonate around eerie strings. It is through the darkness within the aforementioned ‘Majestic Fruit’ and soaring personality that bleeds into ‘Anya’ that Flamingods demonstrate a tendency to play with emotion. They demonstrate this ability through subtle saxophone sections and resonating drum patterns that bolster in the background, it is consistently a transcendental process that is equally as cathartic as it is calming. Much in the fashion to Amorphous Androgynous, the electronic samples that fuel the ambience are just as vital.

As we break into the tail end of the album, we begin to hit varying degrees of musicality, kickstarted by ‘Gojira’, a song that returns us to the lightness with its trip-hop feel and quickened tempo. It builds on tribal rhythms as opposed to the previous lethargy and haze, the change in speed appears initially alarming whilst at the same time giving dynamic to the feel of the album. ‘Rharma’ is the previously released single from Majesty and begins with swelling wind instruments that demonstrate the initial textural layer, as the song builds around it, drums enter the equation leading for quite the compelling listen.

In a time when concept albums are rarely produced in a good fashion, Flamingods have broken the mould and breathed a new life into what was previously believed to be a slightly dead notion. Majesty is truly an album that needs to be listened to from start to finish with no interruption in between. It dictates scintillating imagery via its deep textural endorsements and otherworldly sounds. It is not just multifaceted in its sound but it is exceptionally multicultural, bleeding together the East and West with ease and precision – nowhere is this better seen on the album than with the ecstatic ‘Mountain Man’, a song that is celebratory of the album itself – joyous, poignant and relentless in movement. When Flamingods play at The Hope and Ruin in early July, miss them at your own peril.
Tom Churchill