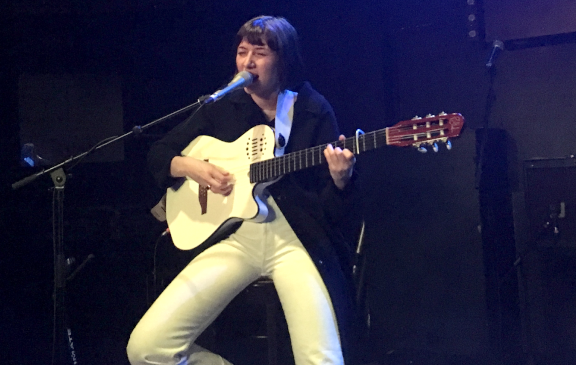 It’s been a pretty good year for Aldous Harding, the gloomy folk artist from New Zealand, all things considered. Not only has she transitioned to a new, major label nicely (4AD), but she’s released her second album, Party, which recently received the coveted Album of the Year award from Rough Trade. She played The Haunt in support of this album in a show that was as enchanting as it was surreal; as bewitching as it was beautiful and, for such little stage production, one of the most captivating shows of the year.

Love that name. I can only find one instance of a well-known Aldous, and that is the male writer Aldous Huxley. It is a very rare name, but one that has only helped give the New Zealander Aldous Harding a distinctiveness. It’s certainly memorable, more so than her birth name of Hanna.

From the timeless folk sound of the beautifully intransigent ‘Stop Your Tears’ (I will never marry my love / I will die waiting for the bells / Death, come pull me underwater / I have nothing left to fear from hell) to the fiddle-infused ‘Hunter’, and the utterly hypnotising ‘Two Bitten Hearts’, Harding’s music is perhaps best described as gothic-folk, full of haunting prose-tales that speak of tenaciousness in the face of bloody reality. This latter song from her début album is just her, a quivering voice, an acoustic, and occasional snatches of ghostly bowed saw over six and a half minutes, the rhythm of the guitar unchanging throughout, the effect intoxicating and quite beautiful as she sings as if in a trance.

She has said that her music is primarily motivated by fear, “It’s been the same fear I’ve had for… years. I don’t know where it comes from, but I don’t think the drugs in my youth helped. It doesn’t debilitate me, I can still charge around and I don’t feel so alone in a crowd. I had to figure myself out after I lost it. I had to figure out why I got there and once you’re in that sort of place you don’t have a choice.”

Harding has shown herself to be mature beyond her years, her music recalling the likes of Sandy Denny, Vashti Bunyan, Joanna Newsome, and early inspirations Nick Drake and Neil Young, although her music is hardly directly influenced by any artist in particular; “The Aldous Harding record isn’t easily placed because it wasn’t trying to sound like anything. It was quite organic,” she says.