Favourite Album: Darwin Deez – Ten Songs That Happened When You Left Me With My Stupid Heart

Darwin matures as both a person and an artist right before our eyes, or perhaps ears, with each successive album. His brilliantly-titled fourth album, Ten Songs That Happened When You Left Me With My Stupid Heart, showcases a raw, post-break-up Darwin in an endearing meditation on male identity and self-expression. This is especially poignant in these times of increased mental health awareness and discussion and is backed up by Darwin’s podcast Darwin Deez: Occult Donuts. There Darwin has touched upon such thorny subjects as suicide, with direct, posthumorous reference to the late Scott Hutchison of Frightened Rabbit, whose music he had loved and revered, as well as to his own, related struggles.

Yet, far from being a bleak listen, this is, in actual fact, a comforting hug of an album and is, on the contrary, a joy to listen to. It has, counter-intuitively perhaps, been my go-to, get-happy album of 2018. For every bittersweet reference to reticent, affection-shy girlfriends and paternal error, there are joyous, singing frogs and crickets, tentative yet contagious hope for future love, plus a killer jazz trumpet solo to knock you sideways, in the best of ways. There is nothing not to love here. 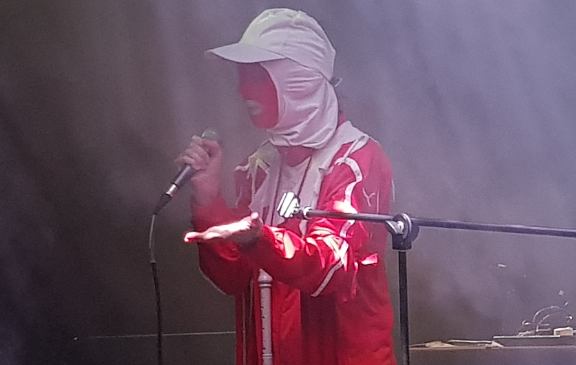 It is no understatement, and an unintended pun, to say this show had all the hallmarks of a gig you might see once in a lifetime, both for Byrne and band members, as well as for many overwhelmed audience members, myself included. Without a single cable in sight and entirely mobile on a minimalist stage, this tour saw David Byrne boldly redefine what live music is and has the potential to be and did not fail to wow at each and every turn. An exhilarating mix of new and old material, the setlist spanned Talking Heads to Byrne’s latest solo album, American Utopia, and harked back to Stop Making Sense days, with the identical grey trouser suit worn by each of the dozen musicians on stage.

This show was a tonic providing respite from these febrile times, as evidenced by the beaming faces of fans reluctantly tearing themselves away at the end. The perfect Groundhog Day – I’d gladly have it on loop, ad infinitum, such was the life-affirming exuberance, imagination, and impressive, professional polish. Reasons to be cheerful (the title of David’s accompanying lecture tour) indeed!