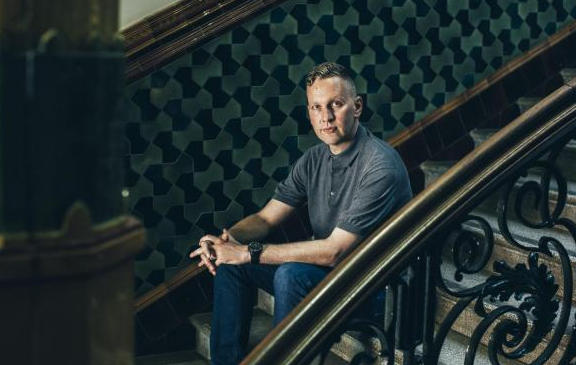 The 52nd Brighton Festival, the largest of its kind in the UK, is headed up this year by Guest Artistic Director David Shrigley. A relative unknown, Shrigley operates in the world of the visual arts, as a lively, sly, sometimes subversive illustrator, writer, film-maker, conceptualist and sculptor. You may have seen his Really Good sculpture (a massive sculpture of a thumbs up, or a ‘like’!) on Trafalgar Square’s Fourth Plinth. Or his 2013 Turner Prize-nominated installation David Shrigley: Brain Activity. Or perhaps his headless stuffed ostrich, or his cast of a single tooth (Brass Tooth) which he then created multiple editions of, and sold at £1,200 a pop. He’s also a big music fan, and has worked with many artists, including making videos for both Blur and Bonnie ‘Prince’ Billy, designing record sleeves, and collaborating with musicians such as David Byrne and Grizzly Bear for his spoken word project Worried Noodles. Brightonsfinest got the chance to catch up with him at this year’s festival launch.

But, you were late this morning, weren’t you?!
I was late, yes. But, if anybody can be late, it’s me.

How did you get involved with the festival?
I moved to Brighton in 2015, and the one friend I had at that time, who lived in Brighton, (writer) Craig Melvin, we went to see some stuff in the festival and I thought, ‘Wow, this is really cool’. Craig said, ‘I know the Director of Brighton Festival. Maybe you could become the Guest Director’! I said, ‘I’d really like that, but do you think they’d want me’!? They asked me, and here we are. I’m humbled to be added to a very impressive list of past Guest Directors, that includes Kate Tempest, Ali Smith, Laurie Anderson, Brian Eno, Anish Kapoor.”

What are your impressions of Brighton as a place to live, and work from?
I used to live in Glasgow for many, many years. My wife and I fancied a change, and we both had the flexibility to go somewhere else. Brighton was a place I chose to come to. I didn’t move here for love or work. It’s a city I’ve always loved. My sister lived here in the 90s and when I came down to London to do things, I would always stay with her in Brighton. It always felt like my kind of town.

You went to Glasgow originally to do a degree at the Glasgow School of Art, where you got a 2:2!
Yes, getting a 2:2 in fine art, it’s the degree you get for turning up.

You have said that people didn’t really understand what you were doing, art-wise…
I don’t demonstrate a lot of craft skills in my work. Which for some people is problematic. But, it doesn’t necessarily set it apart from the rest of contemporary art, versus conceptual art et cetera. The thing that people perhaps have a problem with most is that it is very comic. It’s also anarchic, and rebellious in a way. It’s difficult and dark, bits with a joyful nonsense to it. Comedy infuses a lot of what I do. It seems that in the world of fine art, comedy is problematic for people. But, I’ve made a career from it, and that’s become my niche. I’m not taken seriously by a lot of people in the art world. But I make a living, and I get to do what I want to do. I don’t care at this stage of my life.

Tell me how the Worried Noodles project came about…
Music is and has always been a big part of my life. A big part of my social life, going to see bands. I used to be in a band…

Who? Do we know them!?
Unfortunately not! My ambition was to learn to play the guitar, and stand up on stage and sing at the same time. Once I had achieved that I lost interest in being in a band. But, strangely, years later, because I let it be known I was a big music fan I ended up designing record covers for a lot of bands. Then a record label asked me to make a cover for one of their bands. They said maybe we could do a record cover like an artwork, but didn’t have a record in it. I liked that idea, but it didn’t seem enough of an idea for a product that people would want to have. So, I made a songbook for it to go in, a bit like the hand written lyrics you get sometimes, but still no vinyl. So, it was a funny and odd conceptual publication, really. And that went quite well. I guess inevitably, the record label said, “Why don’t we give the book to people and they can interpret your lyrics and turn them into songs”. That’s where Worried Noodles came from, and it ended up being this really peculiar collection of pop music. I didn’t choose many of the bands, although I did call in a few favours, like Franz Ferdinand and David Byrne. The rest of the bands on there, most of them I hadn’t heard of at the time. Liars being one, and Grizzly Bear. If I had curated the whole thing it would have included Japanese noise music, like The Boredoms. So, it was very well it was a collaboration with the label.

I’m involved in a new musical theatre project (Problem in Brighton, 10th-12th May, The Old Market), making electric guitars for them to play. I don’t really know why I’m doing it. They only make sense once you’ve given one to someone to play. These are sculptural works, because I’m an ‘artist’, but there’s something about the guitar I have always loved. As an object, it’s somehow more than just a tool for making music. It has a presence and a desirability. I made this series of guitars which are called ‘Problem Guitars’, and that’s because they only have one string and the fret is in the wrong place.

You can make great music with less than six strings. Seasick Steve makes a living out of it, doesn’t he?
Yeah, you only need one string and one finger.

I only recently discovered that the original B-52’s guitarist (Ricky Wilson) only used four strings on his electric; the top and bottom two…
There’s a lot of precedent for this. Like the guy Ruins (Japanese musician, Tatsuya Yoshida) he plays with people who generally have just one string. And Lightning Bolt, that guy had just one bass string and one guitar string. It’s all about the effects and the attitude, isn’t it?

Going back to ‘Problem Guitars’, you mentioned at the launch that you’re working with Lee Baker. He’s a great musician and illustrator who I’ve known for years, and is still based in Brighton. How did you hook up with him?
I met him in Ground, in Kemptown. I guess that’s a cultural hub, isn’t it? Lee was making a visual arts project that I participated in last year, called The Skip Gallery. Partly as a response to not being able to find an exhibition venue in London, Lee and his partner Catherine decided to buy a skip and park it in places, and make exhibitions in the skip. I got to know Lee and another friend of his, Sean Hennessy (Chungking) helped me in the studio. He’s also a visual artist as well, like Lee. I just thought I would ask Lee if he was interested in writing some music. Lee is such a versatile writer, which was what I was really interested in, and whether I could have some input into the music. Rather than the collaboration I did with Malcom (Middleton) where I just recorded stuff and gave it to him.

People are resources. Lee is a resource for me, just as I am a resource for him. Collaborations happen. Brighton is that kind of place, and what has helped me to start feeling at home here.

You also managed to entice Deerhoof to come and play the festival. You did a series of record covers for them back in 2007, for the Friend Opportunity album…
The Guest Director doesn’t really programme anything. It’s more of an opportunity to present something yourself, and to perhaps be a figurehead for introducing people to a project. I was basically asked for a list of things that I wanted to put on. Deerhoof was one of them. They’re a band that really make sense live. They’re an amazing live band, far more so than anyone else I can think of.

Who else was on that list?
Ezra Furman was also on that list because I hadn’t seen him play even though I have some of his records, and I really love his stuff. I didn’t imagine he would actually play the festival. It worked! I brought the mountain to Muhammad, as it were.

And there’s Malcolm Middleton, and Ian Shaw. Malcolm’s an old friend, who used to be in Arab Strap, an amazing singer/songwriter. Ian Shaw is also a singer/songwriter from Glasgow. He and I are collaborating, where once more I’ve written a bunch of stupid lyrics, and he’s gradually converting them into Elliot Smith-esque, melodic acoustic songs.

Since you’re actually living in Brighton you’ll get the chance to see a lot of stuff…
Since I have to be here, I will go and see everything. I would advise everybody to go see everything.