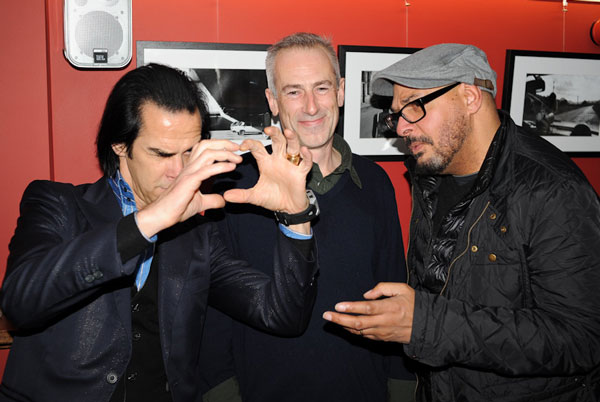 Tell me about your role
Well on the one hand, as you would expect, it involves a lot of watching films and making selections for the festival. We are a very small team and we are all involved in this to some degree but we also have a network of friends and colleagues who tip us off about things and make recommendations. We also try and work in collaboration rather than in competition with other festivals across the UK. An example this year is our Opening Night film BIRDMAN, which simultaneously closes the Leeds Film Festival and opens CINECITY on the same night, Thursday 20th November.
But there is a lot more to the job than just watching films. For instance with the BERG installation this is something we have worked on for a much longer time-frame, more than 2 years, and is a project devised and developed with the artist/production designer Anna Deamer. This was a follow up to the very positive response we had to the last film set installation we presented, HANGOVER SQUARE, during House and Brighton Festival in 2012. A project like this is perhaps more akin to a film producer role and getting a film made. It starts with an idea, then raising the money and getting a key team together and all the while developing the idea creatively and practically.
Tell me about how the festival started
We held the first edition of CINECITY in 2003. Brighton didn’t have a dedicated film festival of its own so we stepped in and set it up. I had already been at the Duke of York’s for a few years so I knew from experience that there was a thirst among the Brighton cinema-going public for the kind of films and special events we put on. I hope that audiences have come to trust our judgement over the years, but of course you can’t please all the people all of the time! In a way that’s one of the joys of cinema – two friends can come out of the same film with very different opinions.
What role does a film festival such as this play?
I think film festivals play an increasingly important role. Firstly, there are just so many more films being produced and festivals can really help guide audiences through this landscape. Also as mainstream cinema takes fewer risks, festivals increasingly act as a kind of alternative distribution network. And in our digital age it is also the festival experience itself that matters more and more – the special one-off quality of ‘event cinema’ and all the social aspects of a night out at the cinema. CINECITY doesn’t just play previews of films that are about to come out, there are lots of special one-off events and films playing only at the festival, and that won’t be on release until later. It is important to have that element if discovery. We also have a particular focus on debut films. There is also a showcase for film-makers based in the city. Of course there are loads based in Brighton and it’s really important to give them a chance to see their films on the big screen.
Music always seems to be a healthy part of the festival, why is that?
It partly reflects our own interests but also since the earliest days cinema itself was this combination of moving image and music. Even in the silent era, films were never silent but accompanied live, whether by a solo piano or a full orchestra. That’s one of the lovely things about putting on such events at the Duke of York’s. It was built in 1910 and has great acoustics. For its first 20 years of life it would have had constant live music before the advent of synchronised sound around 1930.
What is your background?
I was in bands from the age of 15, then studied Fine Art at Sheffield Poly. I went there mainly because of the music scene. I made Super 8 films at college and then moved back to London when I got a job at the ICA. It was like an old-fashioned apprenticeship in some ways, 12 months as a trainee film programmer. Working in film exhibition is what I have done pretty much ever since.
What role do the patrons have?
The patrons get involved as and when they want to really, there is an open invitation for them to be involved. Barry Adamson is obviously very involved this year having composed music for the BERG film set installation. Barry will miss the launch unfortunately as he will be away touring with Nick Cave, who is another one of our patrons. Nick often does events with us; we have had previews with Q&As of THE PROPOSITION and THE ROAD.  He first got involved 10 years ago when he curated a programme of Berlin-set films for CINECITY back in 2004.
Another patron Henry Normal, suggested a film a few years ago – DOWN TERRACE – which was of course Ben Wheatley’s first feature. I think only us and one other festival in the UK screened it.
Give me a couple of highlights for this year.
The films I’m most looking forward to seeing again are THE TRIBE (from Ukraine) and TIMBUKTU (from Mali). I’m also really looking forward to seeing how the production design, music, sound and voices all come together in the BERG film set. In terms of live events I’m really looking forward to the live scores from Pere Ubu and Juno Reactor.