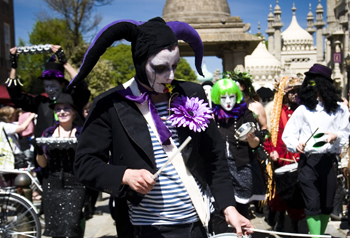 What’s the history of the Kemp Town Carnival?
The roots of the Carnival stretch as far back as the late 70s. The Kemp Town Pram Race, a fancy dress pub crawl/race through the streets of Kemp Town Village, was a cherished annual community event that eventually came to a close in the early 80s.

The Carnival itself first came into being in the mid 90s through a community partnership between St George’s Church and Sussex House. The event grew through the years until it was brought to an end in 2007 after a dispute with a handful of local traders.

In 2009 I had starting running the monthly CooktheRabbit music night at the More Bar on Trafalgar Street (now the Breeze Bar) and was very lucky to host some incredible bands and artists, including the Resonators, Derrière, Los Piratas, Manjinga 7, Pollito Boogalo, Bunty Looping, Nebula Starway, Nhasitafari, Manoushka and the Kalakuta Millionaires (now signed to Tru Thoughts as Lakuta).

I met many of these artists via the Brighton Samba community and the networks of musicians and artists linked to the very active Brighton Carnival scene. I’ve been playing with community samba bands Barulho and Maracatu Cruzeiro Do Sul since 2006 who have played (and continue to play) at the Children’s Parade, the Burning of the Clocks, Lewes Bonfire and many other UK Carnivals, festivals and events. Having links to all these performers made the progression quite natural.

You’re credited with bringing back the Carnival – why was it on the brink, and why do you think it’s steadily growing now?
A couple of attempts to relaunch the Kemp Town Carnival were made in 2008/09 but for many reason’s it just didn’t stick. The 2009 attempt, the Kemp Town Villagers Street Party, was the first time I led Barulho and looking back it seems to be the turning point for me in many regards. I was keen to help make the event a better one, but DrinkInBrighton, who financed the 2009 event via the Thomas Kemp, hadn’t seen a return on their investment and that was that. I can’t quite remember the point when I decided to push ahead and try and make it happen, but I spent the next 10 months of 2010 talking to everyone in the area, residents, traders, community groups and churches, and began to get a clearer picture of what the Carnival had been, why it had ended, and what it might take to bring it back.

I helped form the Kemp Town Carnival Association in October 2010, with Geoffrey Bowden becoming the Chairman. The KTCA is an open platform for the people of Kemp Town to have a say in what takes place at the Carnival and how it is governed. Our first Kemp Town Carnival took place in 2011 and since then the Carnival has grown in size and calibre, and is now the largest free community arts street festival in Brighton.

This year the carnival will be the biggest it has ever been. What are some of the changes and additions you have made to it in your time?
We are planning to expand the footprint of the event to include Upper St James Street (between Upper/Lower Rock Gardens and Upper/Lower Bedford Street). Aside from the clear need to expand our capacity for safety reasons, there is a great deal of support to see this section of Kemp Town included, not just from Local Traders and public houses, but from St Mary’s Church, Somerset Daycare Centre, and many local residents.

The expansion means we can include two more live music stages, a stretch of craft stalls, a disabled viewing area for the parade, a community performance area within St Mary’s Church and the space to hold the biggest Carnival parade that Kemp Town has ever seen.

What are the particularly exciting features of it this year?
The Parade of Flowers is definitely the thing that everyone needs to come along early to see. We have received Arts Council funding specifically for the parade, meaning that we are leaping from having four parading troupes in 2014 to sixteen on June 4th this year.

The Parade line up includes the Voodoo Love Orchestra, Fanfara, the NEON SAINTS, King Lagoon’s Flying Swordfish Dance Band, the English Disco Lovers, as well as everyone of Brighton’s Samba bands and other Samba bands and Carnival groups coming from Manchester, Bristol, London, the Isle of White and Nottingham.

How would you describe the musical programme?
A sexy hot pot of Brighton’s finest. We are very blessed to have the backing of so much amazing talent. The artists really seem to understand what the Carnival is about and the support we have received over the last four years, and support we continue to receive, is incredible. The Carnival would simply not be what it is or even happen at all without them.

Describe some of the difficulties involved in the organisation of an event like this.
Each year we have staged the Carnival we have encountered fresh issues which we have always successfully worked to resolve the following year. However, with the best will in the world, it is near impossible to please everyone.

The one never ending difficulty we face every year is finance! It really does boil down to money unfortunately. The Carnival is facing unprecedented core costs this year of £60,000. We’re hoping to negotiate the £10,000 of additional council charges that have been levied against us (up from £900 in 2014), but even if we can find an agreement with BHCC, finding the funds to stage a 25,000 person, free access event safely, is becoming increasingly more difficult.

We are looking to the people of Brighton and Hove to support the Carnival and keep it going and there are a few ways that people can help: our Gofundme crowd funding campaign is up and running with rewards that include the Kemp Town Carnival Album – 16 tracks from some of Brighton’s hottest acts, Carnival T-shirts, prints and the chance to be the Carnival King or Queen and ride with the lead Carnival float.

We are also hosting a fund-raising gig at the Spiegeltent on May 18th with King Lagoon’s Flying Swordfish Dance Band, Barulho, the Neon Saints and the Dulcet Tones A Cappella Choir. We’re also planning a Carnival after-party at Rikki Tiks, The Tempest and the Fortune of War with a phenomenal lineup of DJ’s and Carnival acts…more details to come on this one.

We will also be taking collections at the Carnival itself. Quite simply, if everyone puts £1 in the bucket, the Carnival will be 100% secure for another year.

What does the Carnival mean for you personally?
One of the most frequent comments I hear from people who come along, are from folk who managed to catch up with so and so, who they haven’t seen for ages. Bringing people together and seeing so many happy faces has been one of the unexpected rewards of the Carnival for me.

The Carnival has been my life for the last six years. I am very lucky to have been in a position to drive the event forward, been supported by a fantastic team of incredibly skilled and dedicated colleagues, to work with some amazing people within the community, and help to showcase the wonderfully talented and unique artists who inspire me year on year.

As with every community focused event in Brighton and Hove, the Carnival has an uncertain time ahead, and if it is to continue into the future, it really will be down to those who cherish the event and want to see it continue. If everyone who come’s along, take’s part, and celebrates together, would be kind enough to spare a few quid, then the Carnival can truly live on.