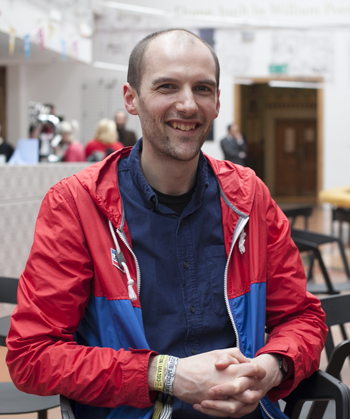 What is your official title and what are your roles and responsibilities?
I am general manager. I oversee the day-to-day management of the festival. We’ve got our booker, Adam; our marketing manager, Karen; and Lisa, who is our production manager. My role is to make sure everyone is on track with what they need to be doing, hitting our deadlines. I also oversee the festival budget.

And before that?
I have always worked within festivals and promotions. Before TGE I used to work for a similar festival in Manchester, called In The City, and then when that finished up, I worked for a festival called Future Everything, also in Manchester.

The founder of The Great Escape, Martin Elbourne, is he still involved with TGE?
He now works for TGE in a more advisory role. He’s got his fingers in many pies, and goes to so many events all over the world. Martin gets to see a lot of international artists so is still involved a bit in the booking side of things. It’s always good that someone from The Great Escape sees an act before they are booked.

What is the purpose of TGE?
All the acts we book through our international partners or through UK agents are of an export ready quality. The whole reason TGE was set up in the first place was to give acts the chance to perform in front of new music fans, but also the industry, with a view to booking them for festivals, and generally do business with them. We gauge the success of TGE by the future success of the artists that come and play. What we want to see is artists play the TGE and then see them climbing up festival bills for the next 5-10 years, until ideally they get to a headline status.

TGE is now in its 11th year. Anything new we can expect this year?
The biggest development is that we are going to be hosting our first ever TGE street party, that will take place on New Road and Jubilee Street. There’s so many TGE people there anyway, we just thought we should apply for some street closures. New Road will be closed Thursday and Friday for the TGE (on the Saturday it hosts Fringe City), and Jubilee Street will be closed Thursday, Friday and Saturday. We’ll have two stages on New Road, trying to create a festival feel. It’ll be open to anyone. It’s a way of giving back to Brighton as well.

We’ve also got a new partnership with the Raindance Film Festival. Raindance has a similar ethos to ours, but in the film sense. They champion new and emerging creative film talent. Raindance have programmed one film per day which will take place in the Bosco Theatre, part of the Spiegelhub. For instance on Friday we are showing Night Thoughts, which is the new Suede film, and there will be a Q&A with singer Brett Anderson.

What does Brighton lack, if anything?
Ideally we’d like someone to open up the Hippodrome! From our point of view Brighton doesn’t lack much at all, but the one thing it does lack is that size venue, in-between Concorde 2 and the Dome. It’s not just from a TGE point of view, but I think culturally for Brighton as a whole. Brighton can potentially lose out to bands at that level, because there is nowhere for them to go. Apart from that, Brighton has everything!

Do you get the chance to see anything during TGE, or is it all work, work, work?
My golden rule is that I see at least one thing a day, that I want to see. The first year at TGE I got swept up and spent all my time in the production office, and the entire festival passed me by. And you think, ‘I worked all year on this one event and you don’t see anything’ that sucks! It’s important to see the event, and people’s reactions. It puts it all into context.

Tell me about Indie50 and your role
I am one of the judges on the panel. WeGotTickets approached me, to see if I would be one of the judges for Indie50, a search for the unsung heroes of indie music and the UK’s independent and grassroots music scenes. Brighton is such a fiercely independent city and there are so many independent businesses, it’s an advocate for independent music generally. I saw it as a great opportunity to help push people, who may not be recognised, into the limelight a little more. The idea is that instead of focusing on artists, Indie50 is about the bookers, venue owners, sound techs, and others behind the scenes. It will be based on nominations from the public/artists, then whittled down to 50 by the panel of judges, hence the name Indie50. We were asked to put forward our own candidates. A lot of mine will be very much Brighton focused.

Who can nominate and what is the deadline?
Anyone can, via the Indie50 website (www.indie50.co.uk). Nominations close on 31 May.

Who else in involved?
The judges are Tom Ravenscroft from 6Music, live agent Jason Edwards from Coda, music writer Laura Snapes, Stephen Bass of Moshi Moshi Records and Dave Newton from WeGotTickets.

How strong do you think the independent sector is?
The independent sector has always been undervalued, although perhaps in the last 5-10 years people have been taking a bit more notice. I think artists have taken on a more independent ethos, and this is becoming a necessity as labels are taking on fewer artists and less risk. So, retaining their independence to push their career forward is becoming more and more prominent. Perhaps the best case study in recent years is Enter Shikari, who have kept pretty much everything in-house and independent; they book their own gigs, they release their own albums. At the end of the day people want to hear good music and I don’t think they necessarily care whether a band finds a label or not. Obviously, the label helps with distribution and investment and that kind of thing, but there are different ways and means of releasing your records and getting them in front of people. I think there are more tools out there than ever before to help artists do that.

What was your first love, music-wise?
The band I was brought up on was The Rolling Stones. My mum and dad were both huge fans. My first ever show was Wembley Stadium, 1999. I’ve still got the ticket. As a teenager I got into indie-rock. It was a time when bands like The Libertines and The Strokes were blowing up. I still like a good guitar band, but my tastes have expanded. I listen to a lot of urban and grime music at the moment, electronica and techno. And also I’m getting a lot more appreciative of a good pop song! I’m also listening to a lot of PC Music, which is a record label (artists such as Hannah Diamond, Sophie), which is weird, glitchy pop music. You listen to it at first and think ‘what is this noise?’, but with me it clicked.

If you could see any artists tonight, dead or alive…
It would be Queen with Freddy Mercury.