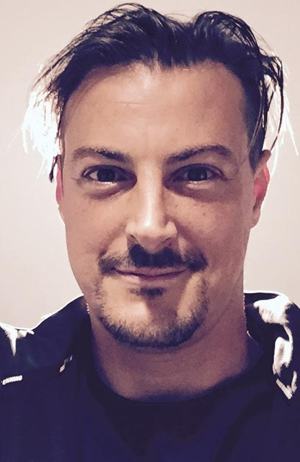 What is your job, and what does it entail?
Director at Brighton Electric, AKA Captain of the ship. I own & run Brighton Electric and all that entails.
Tell me about your background.
Got a Degree in Marine Navigation, failed at being a rockstar, now a crazed studio business survivor…
Why and when did you come to Brighton?
I always wanted to come here as I came here as a teenager and loved the place. Finally got here via Bognor Regis in 1999.
Tell me about Brighton Electric, what it does, and how it does it
Brighton Electric is a large high end recording and rehearsal studio complex with 17 rehearsal rooms and three recording studios,
Tour bus & pro audio rentals. We are sometimes called the Abbey Road of Brighton. We were shortlisted in 2010 for the Music Week studio of the Year award. Though Abbey Road won it we did get to sit with Skint Records at the Parklane Hilton & get shit-faced.
Our mission is to provide high end, affordable studios. When I was trying to make it I hated the snobbery I copped from people in the music business so wanted to create a place where artists felt genuinely welcome, where they sort of own the place. Also, I wanted to make high-end recording accessible, so any band could afford to get a terrific sound. Now I realise there are some great people in the music business, too. However, I still feel like Electric is a bit of a sanctuary for artists from that. We support and encourage artists from all backgrounds to make music.
We also support visual artists and charitable organisations Sea Shepherd and Amnesty International via collections, events and matching donations.
And some of the team that work there…
Jimi Wheelwright, Studio manager; Nige O’Brien, Rehearsals Manager; Luke Dunstan Tech geek and 13 other highly dedicated, committed individuals.
Do you know much about the history of the building?
Yes, It was purpose built in 1897 as the Brighton & Hove Tramways head office Mark 2 – Mark 1 was built at Preston Circus but the ground was too boggy and it collapsed. Fortunately, ours is still standing. You can see the last two metres of tram track in Brighton round the back, which isn’t as exciting as it might sound. It was used for this continually until we took occupation in 2001. We’ve tried our best to restore the building’s beautiful mosaic floors to their original condition and keep the brass work polished.
It seems you have a fair bit of vintage recording gear. Is there a stronger demand for this than ever before?
Not that I’ve noticed.
You have a tremendous client list; local, national and international acts. What, to you, do musicians look for in choosing rehearsal and/or recording facilities?
Vibes, professionalism and quality.
Tell me about some of the highlights so far (in terms of acts using your facilities)
For me, the first time The Cure played here. Foals writing and rehearsing their first album at the same time that the Maccabees were upstairs and Bat for Lashes downstairs were doing the same. Having John Cale and a 17 piece orchestra in our live room 1. Knowing that Architects still use us after 10 years. Royal Blood finishing their number one album in Studio 1. Something very special later this year.
Who is currently there?
Sorry can’t say (not allowed) . Very recently had Alison Moyet, The Wedding Present, Blood Red Shoes, British Sea Power, Architects & Joanna Gruesome in.
Do you sometimes hold showcases/events for the public?
Yes, we’ve held many fantastic events, fund raisers, record launches and alternative events for various artists over the years.
What do you think about Brighton, music and otherwise?
Brighton is a fantastic place to live, geographically and culturally. Cool band scene, alway seems to be something bubbling up under the surface; there’s a great Pysche-Kraut rock thing going on at the moment. Only downer is that it’s so expensive to live here which doesn’t really encourage artists to stay.
Do you go out to gigs?
Occasionally. It’s a bit of a busman’s holiday after hearing and talking to bands all day.
Any recent favourites?
Written in Waters are cool, also Jungfrau, Tigercub, Ragweed, Planes to name just a few. There’s loads more. Demob Happy are good. Plenty of great bands in Brighton.
Any plans for the future?
Just constantly improving the place to create the world’s best studios. It’s my life’s work.
If you could see any artist(s) dead or alive, tonight, who would that be?
Nirvana of course, though I have seen them already.