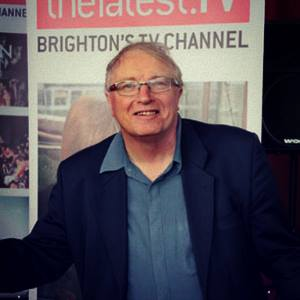 It’s been talked about for a while but finally proper local TV is here, on your television sets, computers, tablets and mobile devices from the end of August. While America has had very successful local cable TV for decades, this is very new to the UK. In all, 30 licenses have been granted in the UK, including Manchester, Birmingham, Norwich, Nottingham, London, Grimsby and, of course, Latest TV in Brighton. Some are on air already, all are expected to be on air by the end of the year. There is plenty of scope to get involved too, either as a programme maker, producer, editor, cameraman, or in any way to do with television.

1. Who are you and what is your background?
Bill Smith. Known as Latest Bill. I am a writer, theatre and film director and composer. I’ve written books, plays and musicals, and made many albums. I have tried to build a creative industry in Brighton which now includes magazines like Latest Homes, Latest 7 and Kemptown Rag, a music and performance venue Latest Musicbar and a TV channel, Latest TV. We have a number of popular websites and Latest Books, our book publishing company, follows soon.

2. What is Latest TV?
It starts on Channel 8 on Freeview on Aug 28, and also on Virgin Channel 159. It is the TV channel for Greater Brighton and next year the whole south coast from coast to capital. I want Channel 8 to be twice as big as Channel 4, that’s my ambition.

3. Have you had any TV experience prior to Latest TV?
Yes I worked as a producer on ITV.

4. How did Latest TV come into existence, and who instigated it?
I have been campaigning for a TV station in Brighton since 1974, well for 20 years anyway. Finally, someone in government listened. Well done, and a big thank you to Jeremy Hunt! (at the time he was Her Majesty’s Principal Secretary of State for Culture, Media and Sport)

5. Tell me about some of the content of the station. What can we expect at the beginning?
News, views, films, sport, entertainment, music. A Bit like BBC 4, but with a wicked sense of fun and humour and very diverse. Not a frame of boring TV!

6. Are there any plans for additional content further down the road?
Yes we want to turn Brighton into a TV hub. Why not!

7. How can people get involved in Latest TV?
Send an email to me. I am very approachable! (bill@thelatest.co.uk)

8. Will Latest TV be interactive? Will it be on the internet (and will it have a ‘watch again’ capability)
Yes, all those, just like BBC iPlayer.

9. How will Latest TV work with the other cities who are launching a TV station?
We are a network and will combine to share and make programmes! So, expect a history of Penny Lane from Liverpool!

10. How does music play a part in Latest TV?
Massive. We will have hours of the coolest videos on our channel every night. If your band has a video we WILL show it! And all genres from country and classical to bashment and Bhangra. Not forgetting, of course, all my records!

80 x 8 will be a daily music video programme, featuring all the best music videos from across the World. It could have been made in 1962 or 2014 in Billericay or Benghazi or Brighton, and if you would like yours shown please send the relevant link to: music@thelatest.co.uk

11. How can businesses and organisations get involved in Latest TV?
We have a policy of “you make it, we show it”. So, take us up on it and get on TV. No one will stop you. There are no commissioners at Latest TV. You are the commissioners!

12. What is it about Brighton that lends itself to Latest TV?
Do I need to answer that! Brighton is an island of creativity and tolerance and very wicked!

13. How has Brighton changed over the last 20-30 years
When I came here, it had three clubs. A straight one, a gay one, and my house. They don’t need my house anymore as it’s clubland worldwide HQ. Brighton rocks now! When I came here it limped. Now people move here to be famous, before they left to do that!
Brighton 6 London 0