Womad: World of Music, Arts & Dance. Conceived in 1980 by Peter Gabriel plus cohorts and since 1982 Womad Festivals have travelled all over the world, bringing artists to numerous locations and entertaining over one million people. The main UK event was held at Rivermead in Reading, Berkshire, from 1990 until 2006 where it moved to the lush beautiful countryside of Malmesbury, Wiltshire.

Womad, now in it’s 37th year, saw temperatures rocket to 38 degrees on the Thursday as we arrived from Brighton in several traffic jams to Wiltshire at the hottest part of the day, the trees were still and not one cloud gave us hope of shelter from the relentlessly burning sun. After the rather sweaty process of erecting our tents we celebrated with a beer and a seat under the awning and took in the surroundings made uniquely distinctive and beautifully enhanced especially for Womad by the hundreds of flags made by Angus Watt for 25 of those years.

Extinction Rebellion were a strong presence on site this year and hosted a number of debates from their tent near the World Rhythms area. The largest ever depiction of the Extinction Rebellion symbol had been carved out in a field next to Womad (crop circle style). 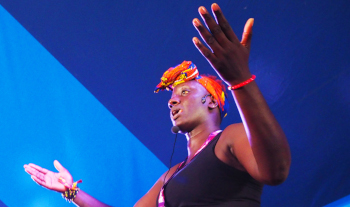 The children’s area provided an out of this world outlet for excitable little ones. A new climbing wall and dance classes were only part of the entertainment for the more energetic children whilst art workshops provided the perfect space to prepare for the legendary parade on Sunday.

The chance to learn new skills from masters in their field is something that Womad offers to everyone. Whether it’s new dance moves and styles, an introduction to playing a new instrument, or finding out the ingredients to a local delicacy, all are on offer at the festival as well as all usual festival oddities.

Our favourite workshop was the Senegalese dance workshop on Sunday morning. A full tent of men, women and children of all ages. We chanted, we jigged and wobbled our bodies in to unfamiliar shapes. We clapped with sweat dripping down our backs and huge smiles on our faces. The stage was full of friendly faces and we were treated to some amazing dance solos the speed and agility of the dancers wowing all of us in the crowd.

What better way than to start Womad with Juan de Marcos’ Afro Cuban All Stars. As the evening cooled slightly and after a few technical hitches and late to the stage Juan de Marcos made his entrance and soothed by the now restless crowd. In fact this was pretty much the single musical reason for me wanting to come to Womad this year. I was introduced to the Afro Cuban All Stars in 1997 and along with the Buena Vista Social Club including Ibrahim Ferrer and Ruben Gonzalez, both bands were to be heroes for-evermore. My expectations for them at Womad were sky high, perhaps too high. As Juan de Marcos graced the stage and paid homage to Ibrahim Ferrer and Ruben Gonzalez by playing some of the Buena Vista Social Club tunes. He pointed out that when they started 20 years ago he was the youngest member, now the oldest and then introduced his wife and daughter – they played a mix of styles including chachachá, bolero, salsa and rumba which seemed so perfect for the end of such an unbearably hot day. His former band-mates would have been in awe of what he has achieved.

A wonderful start for us on Friday afternoon on the Open Air Stage were Santrofi, a high energy Ghanaian Highlife band on their first ever tour as a group. Santrofi,led by Ebo Taylor’s bass player Emmanuel Ofori, bringing a new edge to the traditional Highlife Funk that originally came out of West Africa in the 60’s & 70s. With the sun beating down and the band’s infectious energy the crowd were soon wiggling and jumping to every note. The band’s chemistry with each other and the audience ensured by the end of their set we were all smiling ear to ear as well as sweating buckets. Their album is due in the Autumn and surely one to look out for.

Calypso Rose, the 79 year old legend has been performing for 60+ years and has written over 800 songs – she last appeared at Womad 9 years ago and certainly wowed the crowd with her cheeky personality bringing a smile to everyone present, her slightly risque tune about finding a “Young Boy” and slightly un-p.c. but-forgiveable patter and powerful calypso songs – Rose claims she is still telling us how it’s done and considering she’s nearly 80 we have to give her that crown as well as being the undisputed Calypso Queen.

Jojo Abot was a visual treat with her colourful tribal makeup and outfit, her voice powerful and message empowering. Jojo draws on many musical styles to produce her sound. She is an artist in the truest sense of the word also delving into acting and fashion, both of which she brought to her performances.

Soothsayers are from South London with their West African influenced funk mixed in with reggae and dub tunes, their influences of Fela Kuti and Specials being extremely obvious…….what a tremendous performance they put on. The lead singer had a distinctive and powerful voice, all members being singularly excellent in what they played/sang – a tight seven piece which were added to when they brought on their Community Youth Project members “Youthsayers” onstage – various youngsters (age 12-18) encouraged and mentored by the Soothsayer band members, incredible to see, amazing talent – an uplifting range of tunes, never once dwindling or downbeat. Possibly our most favourite of the festival and will definitely be going to see again.

Making their debut at Womad UK this year were Enverea, who have played on their own turf at Womad Caceras. This wonderful instrumental quintet folk band mesmerised the Ecotricity stage early on in their performance before bringing the tempo up and the audience to our feet with a vast range of instruments including a hurdy gurdy, accordion, clarinet, tin whistle to name but a few. If you’re a folk lover, this is a band not to be missed and if you’re a non-folk lover, Enverea will change your mind.

Salif Keita, the Grandfather of Malian music and undisputedly one Africa’s greatest voices had a large crowd enthralled as the sun set. In his trademark white bowler hat Salif laid down early versions of “Mama” and “M’Bemba”. The highlight of the set was possibly the all acoustic “Awa”, hauntingly beautiful. Finishing with “Were Were” and “Terkere” also from his most recent, and he says final album “Un Autre Blanc” he left the Womad crowd in no doubt he’d be sorely missed if he does indeed retire.

So good to see Mikey Dread & Jah T here at Womad doing what they’ve always done so well with Channel One Sound System – having only ever been to their sound system at Notting Hill before it was a sight to see them playing to such a massive all-ages crowd (including an obscene amount of teenagers: ours were down at the front) in this vast marquee the DB Soundscape Stage (formerly Big Red Tent). Bringing their mix of dub and upbeat reggae tunes they certainly delivered and showed Womad why Dread At The Controls consistently delivers the best dub ever……..the tent was jumping and us along with it…….

I had “scheduled” in my Womad app to see Brushy One String before even coming to the festival just because of his name but making my way to the Charlie Gillett stage it became apparent that 50% of Womad had the same idea, I was not going to get anywhere near this very small area…the usual rugs and seats with lots of space were nowhere to be seen, this area was the most unrecognisable and chaotic that I have ever seen. Brushy, however sounded good (I could not see him) with his mix of blues, roots, soul and reggae whilst plucking his one string guitar (which is a normal guitar with one string!) as a bass and slapping the body of guitar with his hand for a drum effect. “I Heard It Through The Grapevine” in a completely different style. Extremely inventive and refreshing, he wowed the crowd and became a Womad darling from out of the blue.

The legendary Turkish Psyche Dub band BaBa ZuLa had 2 appearances on the Sunday including a Taste The World stage (Turkish Hairy Bikers – uncanny actually) performance where 2 members of the band made Turkish Manti, a type of dumpling that’s been around for hundreds of years. All whilst accompanied by founder member Murat Ertel’s stunning improvised electric Saz. Their appearance on the Ecotricity stage later that evening was more of the same – pure Turkish trance which, at one point , the band brought out into the crowd, instruments and all.

Straight from Havana and performing in the Siam Tent, Orquesta Akokán’s blazing ensemble of soulful salsa, reminiscent of Perez Prado hit the audience right from start to finish with a high-energy mix of traditional & modern salsa-jazz – the crowd reacted with an inexhaustible energy to dance. This music is delivered from the soul of the musicians and artists who perform it and it was clear that it came with a passion deep within.

So for the Sunday band finale – the Womadeers had to choose between Orbital and Robert Plant and his new outfit Saving Grace, depending on your age pretty much made that decision, personally I think you can’t top Led Zepp so opted for the ever-faithful and never disappointing masters of visuals, the Hartnoll Brothers who are Orbital – they delivered tune after tune from “Chime” to Belinda Carlisle’s “Heaven…..” and everything in-between – if you have never had the Orbital experience with their trademark spotlight goggles and the constantly changing visuals and lighting which makes you feel like you’re on drugs even when you’re not, then you need to correct that as soon as.

A truly tremendous finale to the best weekend music, dancing, weather & everything else-wise. Hurry up Womad 2020 we are already gagging to get back to this Wiltshire wonderland where everyone is a free spirit. Love Womad.