It was the first Saturday of December and Brighton was in full festive buzz. The One Church had been taken over by SOTONES, a co-operative from Southampton, who were celebrating their tenth birthday along with a new compilation showcasing some of the bands they have worked with over the last ten years. With the headliner being the Moulettes, their last show in Brighton before taking a year off, along with a host of local favourites and lesser known bands.

I turned up mid-afternoon and there was a reasonable crowd there as the festival had already been running for a few hours. Granfalloon were just getting ready to come on stage, one of the bands I knew very little about. They had come down from their home town of Manchester and should have had a drummer along but he was down with chicken pox. So onstage you had Richard Lomax on vocals along with guest guitarist Joe Kelly and a keyboardist. Richard started on the acoustic guitar but things really got interesting when he moved onto the Omnichord. Which is some sort of electronic autoharp substitute with a strumming pad and worked perfectly in the church. It would have been interesting to hear how it would have sounded with the drums but the three-piece seem to do a fine job of filling the room with captivating music. We were off to a great start.

The church venue was split into three stages. There was the main stage at the front and two small stages on either side of the church. To the left of the stage was Sam Walker’s little den, where he was set up all day and he compèred the whole show. Throughout the day the DJ’s between the acts played a good mix of tunes and as the next act was ready Sam would pick out the beat of whatever was playing. As the DJ faded down the music Sam turned the beat into an introduction rap for the next act. It was a nice little touch and made all the music seamless.

The next act up was Avital Raz on the other small stage. A singer/songwriter with an acoustic guitar may have led you to think “I know what I’m going to get here” but you would be very wrong. Coming from Israel I’d imagine it’s hard to avoid the conflict going on out there, Avital tackled this with one of her songs ‘The Edinburgh Surprise’, which is a song about Edinburgh, sex and conflict. Ending with the memorable lyrics of: “I’ve been f’ed in the ass for peace“. Her tagline is “Making people uncomfortable since 1996” and she seems to live up to it. A real troubadour who the more you listen to what she is saying the more uncomfortable you could become. An amazing thing to experience and it kept me, as well as the rest of the crowd, hanging on her next line the whole way through the set.

Anja McCloskey Band was next up on the main stage and was the biggest line-up of the day. Acoustic and electric guitars, harmonica, two violins and a bass. Now seven-piece bands can be tricky in a reverb-filled church like this and indeed they suffered a bit. The vocals got lost in the mix the whole way through the set and it came across a bit messy at times. It’s a shame as the singer said ‘Also Available for Weddings’, their song on the compilation, was recorded with 40 accordions on it. Just the one tonight and the music sounded good but unfortunately the venue seemed to work against them.

Back to the side stage next for Eliza Jaye, who has been around the Brighton scene for a while now growing in reputation. This will be one of her last for a while though, as she is heading back to her homeland of Australia shortly after this show. I’ve seen her perform a number of times over the years from her three-piece punk band to the transformation to her one woman show. She really seems to have fine tuned the show now, almost to perfection. The venue had nicely filled up and it seems Eliza had pulled quite a few along to see her farewell performance. Most songs start with Eliza laying down a simple guitar loop then moving to the violin and vocals. There can be a tendancy to overuse loop pedals but Eliza seems to have found that nice balance where the songs nicely build up without you thinking about the fact that they’re loops. This amazingly smooth performance of her enthralling songs captured the attention of the whole place, at times when she slowed it right down you could hear a pin drop. In fact she went down so well, she was the only act allowed to do an encore on this tight schedule. Although she may be moving back to Australia, I’ sure she’ll be back here to tour again before long.

Sam Walker was up next and this is the second time I’ve seen him play in a church this year, after his amazing performance in St Mary’s Church at the Brightonsfinest Alternative Escape show. Whereas that performance was much more of a sit down and appreciate the music show, tonight was much ore of a get down and boogie vibe. From the off people were on their feet as Sam ripped though his batch of favourites and there were plenty around that knew them all off by heart. Sam is a master of using the space and playing to the crowd in front of him. Tonight was no exception, Sam got the whole place wrapped up in his music, his whaling vocals, dirty bass sounds on the keyboards and all the tools he used. 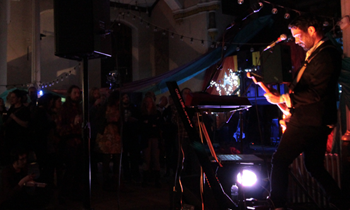 Ed J Hicks was another surprise. He started off as a one-man blues-rock affair, laid back blues guitar lick and slide guitar with rocky vocals. The crowd, still bouncing from Sam’s set, seemed to treat this as background music to talk over while half listening. Though Ed is not that easy to ignore. As the set progressed it seemed like each song would ramp it up a bit. A little more eccentric each song and a little bit more wild. By the end of his allotted time he was throwing out Elvis-style rock poses, screaming and shouting down the microphone and using every inch of the small stage. He also used a loop peddle to good effect, adding a bit of dirty bass to underlay some of his tunes. There was even time for him to move on to the keyboard for a more rock-ballad-gospel song. Overall a very dynamic performance that was very watchable. Definitely more than I was expecting and a good warm up act before the headliner.

The last time I saw the Moulettes was back at the beginning of this two year tour when they played this same church at the Brightonsfinest Alternative Escape show. It was a bigger line-up then, the songs were fresh and the band were tentatively trying out the new stuff on an audience that barely knew the songs. How different it was this time. A more compact four-piece this time, brimming with confidence, playing to a crowd that knew the songs off by heart. From the dramatic start with the “Wo Ow” loop blasting out of the speakers as they came on stage to the closing encores which turned into a medley. The band were slick and professional. There was some nice little banter between songs with the crowd, as they knew many in the audience. Little antedotes like the song ‘Silk’ being about spiders, webs and communication. Inspired by how dew drops reflect light indefinitely. Songs like ‘Songbird’ got the partners arm-in-arm swaying along and the always favourite ‘Lady Vengeance’ picking up the pace. I think barely a year has gone by when I’ve not seen the Moulettes perform and each time it’s a slightly different line-up and slightly different experience. It will be a shame not to have that again for a whole year but hopefully they will return fully recharged with something new and equally as exciting as their previous albums.

So by the end I have to say I was mightily impressed with the festival. The music was top notch and I now regret not turning up earlier to see the bands I missed. It was always going to be hard to get people down on the first Saturday of December to an all-day music festival but the people who did free up the day to head down there were suitably rewarded. SOTONES put on a great show and if this is any indication of the artists they work with then it’s well worth checking out their compilation and investigating the bands on their roster.