Started in 2013, and billed as the first outdoor jazz festival for over 20 years, Love Supreme has always been about combining contemporary and old school jazz flavours, with crowd pleasing pop, along with a little bit of soul, funk, hip hop, electronica, and r’n’b. And while it took a few years to really find its feet, the festival has since become relatively stable and established, albeit within a toxic atmosphere of austerity and Brexit, the main socio-economic-political signposts of our times, pulling negatively at both the economy, and spending power. But, in the main, people know roughly what to expect, and that is a high quality, ‘mature’ music programme, in a safe, none-too-cluttered child/teen friendly space. Although camping is part and parcel of the experience for many, Love Supreme is definitely more Latitude, than Glastonbury, the hedonism toned down. 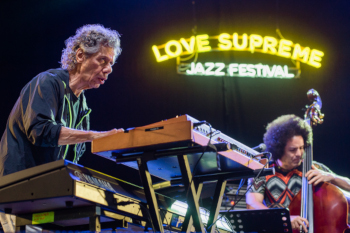 How much of a commercial success it was this year is hard to gauge, bit it certainly did not sell out, and Saturday’s numbers were well down on previous years, while Sunday looked very busy. But, as usual, there were some stunning performances, with actual jazz actually providing most of the highlights this year, including the eagerly awaited Chick Corea , the jazz fusionist pianist extraordinaire and awards-laden elder statesman. Now in his late 70s, but looking a lot younger, his skill and ability barely diminished, the set is firmly rooted in new material (he has just released a new album (Antidote), along with an encore of ‘Spain’, from the 70s, and underpinning the Spanish/Latin nature of his music, and the maestro himself. In particular, his re-imagining of Paco de Lucia’s ‘Zyryab’ is a prime example of the man and band at their best: dexterous piano solo, nestling in with band workouts, beautiful flute playing, superfast flamenco guitar, fluidly working together in creating this mini-masterpiece of progressive jazz. 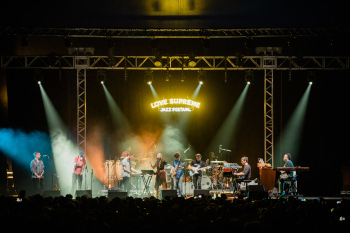 The large American ensemble Snarky Puppy are also progressive jazz fusionists, albeit one of a more contemporary nature, and prolific to boot, Immigrance being their 13th album since their 2005 debut. Michael League and collective (including their trademark two drum attack) have been here before. Tight as the veritable hell, there is a good natured vibe to their sound, as on ‘Palermo’, what League says is based on an Argentinian music, inviting us to get involved with the rhythm via handclaps. While ‘Chonks’ shows their more modern side, a dirty great organ underpinning this warped jazz-funk grinder. And, as added spice, flamenco dancer Nino de los Reyes stalks and pounds the stage with much pride, the crowd lapping it up. 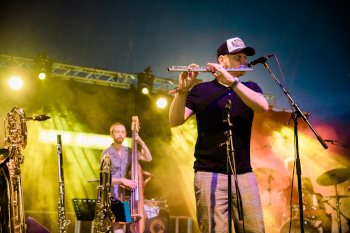 Multi-instrumentalist, producer, DJ and label owner Edward Cawthorne aka Tenderlonious, has just released a new album Hard Rain, and here with a small ensemble, he takes jazz to outer space, employing his love of spiritual tech-house, whilst adding improvised jazzy elements, while love Supreme favourites Go Go Penguin got the party started late on the Friday, with another spellbinding, instrumental, groove laden jazz orientated set, songs such as ‘Ocean In A Drop’ displaying their tip-top chemistry, with the extraordinarily inventive drummer Rob Turner, the tasteful double bass of Nick Blacka and the silky piano motifs of Chris Illingworth coalescing into a trip-tastic whole.

There’s a review out there that says you need to be stoned to appreciate Joe Armon-Jones’ indulgent jams. Wrong! I haven’t been stoned for over 15 years, and Armon-Jones may come across as a consciousness-infused stoner (in a good way), but this performance ranked as perhaps my favourite all weekend, a super inventive, and groove laden workout, with some truly superlative playing, and top vibes throughout, a little bit of dub book-ending the show, carried along by the witchdoctor-esque Asheber (who gave a powerful Grenfell Tower tribute), and both a cracking brass section and rhythm section, bringing tracks such ’Starting Today’ and ‘Icy Roads’, into exuberant life. 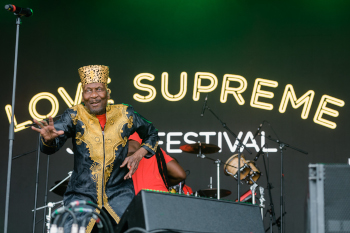 Reggae rarely gets a look in at Love Supreme, but Jimmy Cliff is no ordinary musician. An extraordinary singer with his voice largely intact, and one who has been making records since his early teens, Cliff is perhaps, after Bob Marley, the most recognisable name in all of reggae, with a large repertoire of famous songs to his name. Looking like he was having the time of his life, along with some nifty (if unusual) dance moves, he completely enthralled a sunshine audience with classics such as ‘Vietnam’, ‘The Harder They Come, ‘Many Rivers To Cross’ and ‘Wonderful World, Beautiful People’. Easily a highlight of Love Supreme, one that had huge crossover appeal, and a prime example of the festival’s cultural musical diversity. 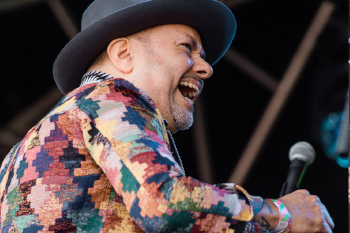 Less successful was Louie Vega & The Elements of Life, a band led by the esteemed house DJ, who did little more than ‘conduct’ the band throughout, a less-than-tight ensemble that lightly grooved along Latin, salsa and house grooves, topped off by an even lighter spirituality. Strong on religiosity, but weak on substance, Vega however delivered an excellent house orientated set late on Saturday night, the first time I had seen him DJ since way back in the halcyon days of house music in the early 90s, and still easily able to lure thousands onto the grassy dancefloor.

Mahalia, still only 21, drew the youngsters to the main stage for a set that highlights how much she has grown, musically and as an adult. She performed here back in 2016, to a half empty tent, but there is no doubting how much interest there is in her now, as she took control of the stage, provided some funny and poignant anecdotes, and demonstrated what a fine songwriter and singer she is, circling around the environs of pop and r’n’b on songs such as ‘Proud of Me’, and ‘One Night Only’, eliciting a joyous response from the largely teenage girl contingent at the front. 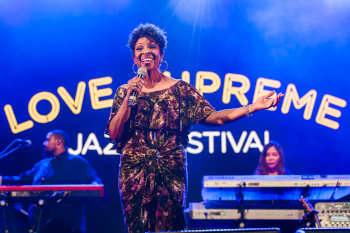 Saturday night’s headliner Gladys Knight was definitely one for the older elements of Love Supreme. This legendary singer may not have quite the across-the-board popular appeal of previous headliners The Jacksons and Earth, Wind & Fire, but what the commensurate pro she is, delving into a ballad-heavy repertoire that included such standards as ‘Help Me Make it Though the Night’, ‘Memories’ and ‘(You Make me Feel Like) A Natural Woman’, as well as lesser known songs such as James Ingram’s ‘One Hundred Ways’, the more widely known Bond theme of ‘License To Kill’, and a rendering of Sam Smith’s massive modern hit ‘Stay With Me’. Largely eschewing the more upbeat numbers she is also know for via the Pips, this was still a tear-jerking masterpiece of vocal control and dynamics. She still has it, at the age of 75, the likes of which we may never see again.

Surreal, but damn funky and full of beans, were relative newcomers Tank & The Bangas, lead singer Tarriona ‘Tank’ Ball resplendent in some kind of green superhero outfit, their lively fusion of spoken word rap, hip hop, funk and rock, all wrapped up in magical, childlike concepts relating to their outstanding new album Green Balloon, the singers throwing mad shapes throughout. This truly organic and musically inventive group were a delight from start to finish. 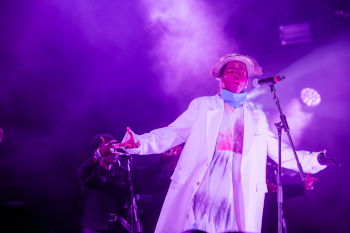 Towards the end of Sunday night French jazz-swing-dance outfit Caravan Palace literally got the place jumping, the overall vibe on Sunday much more upbeat (and significantly busier) than the Saturday, but were victims of an unseemly rush towards the end of their set, as Lauryn Hill took to the stage. I’d be a rich man, the amount of times people wondered out loud to me whether of not she would turn up. But turn up she did, and proceeded to give a powerhouse vocal performance that somewhat divided an audience, her raucous delivery grating for some, enlivening for others. A mystery to most, but one who achieved lasting fame with just two works (via The Fugees’ The Score, and her one and only solo album The Miseducation of Lauryn Hill), Hill nevertheless blazed through an exhilarating set, finishing of with The Fugees ‘Ready or Not’.

A brave, but ultimately successful choice in Sunday night headliner, Hill encapsulated what the festival is about; an eclectic, mature, high quality musical jamboree that mixes up different forms (hip hop, jazz, soul, pop, funk, r’n’b, reggae, and the like), old and new, stars and newcomers alike, to largely triumphant effect. The weather was once again kind, and the atmosphere warm and enticing. Roll on 2020.