Every August, thousands of revellers descend on Winchester’s Matterly Bowl for what is undoubtedly the UK’s most dazzling celebration of music, theatrics and (often) all-out debauchery.

The annual Boomtown Fair grabs your average UK festival and throws it into the stewing pot, adding a heavy emphasis on immersive storyline, and stage designs, that are blown so far out of proportion that only Glastonbury comes close. Then they sprinkle a thousand-and-one paid actors to guide you on your travels through the eight distinct districts, each being home to at least one main stage, and a selection of small-to-medium sized street venues. 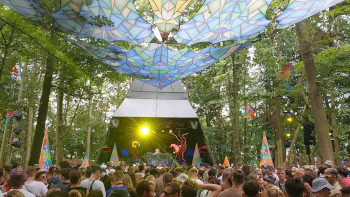 Once you step through the entrance gate just off the A31, the real world fades behind the trees and you are faced with a kaleidoscope of possibilities. Head to the opening ceremony at the Lion’s Den – Boomtown’s red, gold and green heart – for a blaringly energetic tribal ritual and performance from Extinction Rebellion that establishes the themes and objectives of the year’s event. The Psychedelic Forest is waiting to be discovered and offers anyone who makes the pilgrimage a fun, free-flowing rave-space that runs late into the night, with the Pod Café offering some of the best vegan food on site.

The morning after the night before, you’ll do well to get yourself up the hill to find an eclectic collection of activities inside the fences of Whistler’s Green, the festival’s eco-centric, nature-bound district – wood carving, yoga or just share a cup of tea with strangers around the firepit.

Having such a vast array of stages and venues means the festival can provide something for just about anyone. Carl Cox brought a titanic performance to the all-new Nucleus stage – an enormous display of lasers, smoke, and this time with a hugely-improved 360° sound-system – while Prophets of Rage led an adrenaline-fuelled, fist-pumper of a show down at the Town Centre. Fans of drum’n’bass didn’t have to look very far, with stand-out performances from Chase & Status on their RTRN II JUNGLE tour, Fixate, Mefjus and Bou. 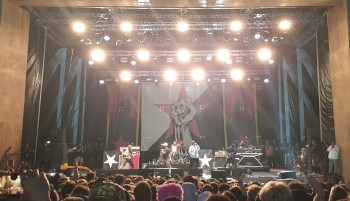 The Streets, Groove Armada and Sister Nancy all brought stellar performances to the Lion’s Den this year, and Slowthai topped the weekend off at the Poco Loco stage, bringing a politically motivated punk attitude to the UK’s hip-hop scene. After just one song he is already half naked on stage in his boxers, explaining that four years ago, before his career started, he went to Boomtown. This is where he decided what he wanted to do with his life, being on stage and rap and people are screaming the lyrics. It’s the perfect ending to Boomtown, a riot of anger, energy and fun.

Each year at Boomtown we see a new ‘chapter’ unfold, detailing the intricate narrative of the city. Last year brought the final death throes of the evil Banghai Industries and the rebirth of a new, wild and Radical City that sat in the ancient ruins of the previous year. Returning to the festival from last year, you would see the same venues now laid in rubble, full of Mad Max-esque revellers.

The Radical City chapter was about putting the imminent environmental crisis front and centre, woven deep into the fabric of the event. The opening at Lion’s Den started with a speech from the reforestation and culture-change charity TreeSisters who, for over a decade, have been planting fast-growing tropical trees across Africa and Asia. To support them Boomtown planted one tree for every ticket purchased to the festival.

On top of this, plastic bottles were banned from the site and were replaced with aluminium cans. Even for water. 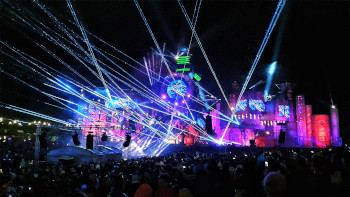 One of the biggest challenges the festival faced in previous years was the amount of waste left behind by campers – we’ve all seen the disaster-zone style photos of campsites looking like landfill sites covered in broken plastic airbeds, half eaten food in plastic wrappers and cheap flooded tents that were used only once. This year was all about small initiatives to reduce the campsite waste, which succeeded with a 70% reduction in waste compared to last year’s event.

Ultimately, Boomtown understands the need to personalise the festival experience. After all, why try to be all things to all people? Within the festival, the experiences are getting smaller and more thoughtful. A little weirder perhaps but engaged with the idea of creating an experience that can only happen once. Boomtown doesn’t try to appeal to everyone. Instead they offer uniquely immersive experiences that will appeal to one or more of the myriad of sub-sections of music fans within the festival.