First, a quick introduction to At The Edge Of The Sea Festival. It’s basically a Wedding Present all-day gig with loads of cool bands that David Gedge, the band’s frontman, has discovered or likes. It takes place at the Concorde 2, kicks off at 3pm sharp and the music is non-stop till kick-out time. The way it works is one band plays in the bar area, right opposite the bar in fact. As soon as they leave the stage then the next band starts up on the main stage. Likewise, when the main stage band is done then the music kicks off in the bar again. So you get a good solid eight hours of non-stop live music.

Except for me, as I turned up late this year and missed Ellie Ford and Cinerama’s sets, which is a shame as I’ve been wanting to see Ellie for a while and I’ve loved the Cinerama performances the last few times I’ve been to this festival.

When I did get there The Sleazoids were just starting their show in the bar. They feature former The Wedding Present guitarist Paul Dorrington and the bar area was packed. It was a good solid set of classic garage punk mixed in with a bit of heavy blues rock. They have not released any records yet but there were some killer tracks in their set like ‘Make Your Mind Up’. They say, “We try to keep all our songs under two minutes long, and play them all as fast as possible” and it seems to be working well for them. 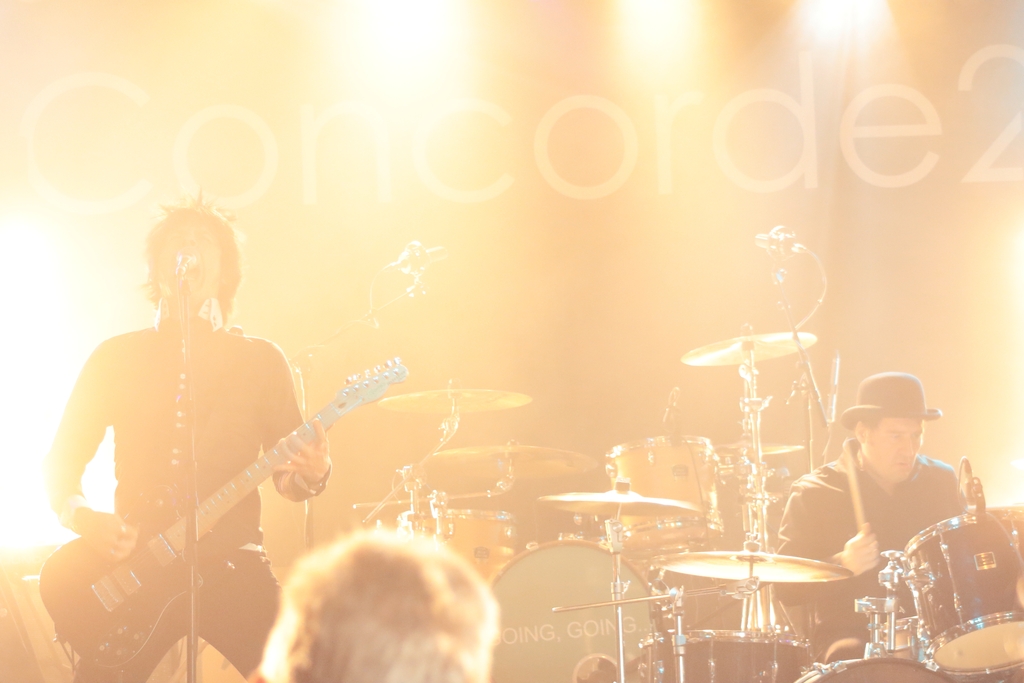 The droney punk noise still ringing in my ears had barely faded before it was replaced by Scare Taxi’s wailing rock guitars on the main stage. Featuring Alexander Boag from These Animal Men, Tara Harley (who apparently has not played live for about 13 years) on bass/some vocals along with Jonny 8 Track on the drums. I do like a good three-piece band and this was a good three-piece: great rocking guitars, anthem rock and groovy melodies topped off with a great cover of ‘Tainted Love’ at the end. 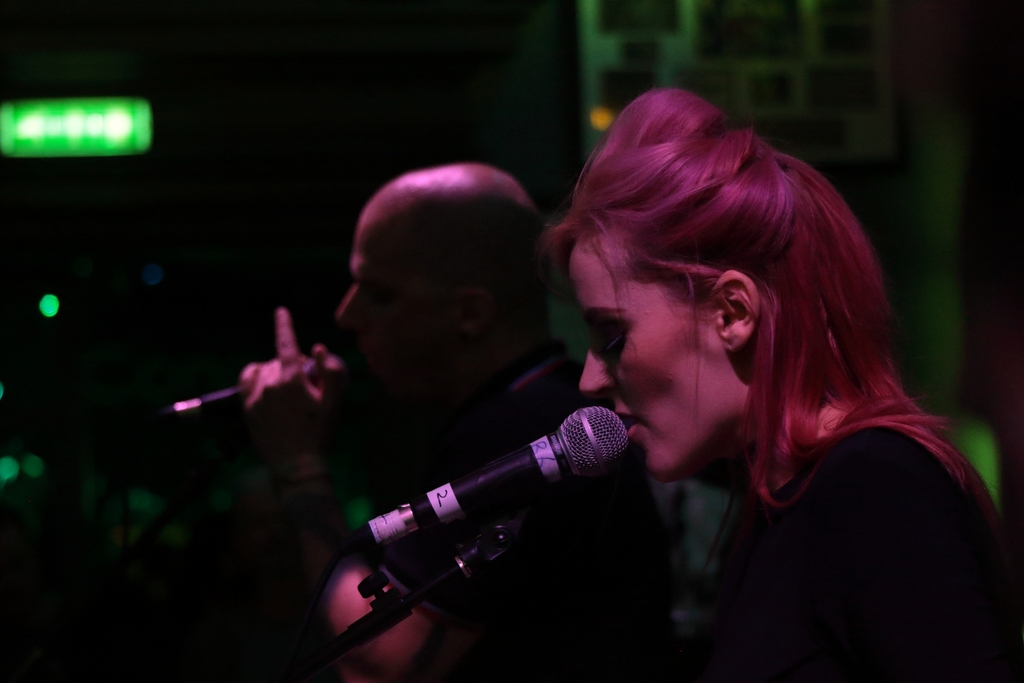 Back to the bar for Jade Inland, a tough sound to describe, sort of post-punk new-wave. It seems they have not played any gigs for a while, this being their first of the year in August. They say they have been working on their songs and, from what they played, it seems they are on the right track. They included The Wedding Present song ‘Getting Nowhere Fast’ from the George Best album, it was a bit of a running joke this year that most of the bands performed a cover of a Wedding Present song. This is something that a few bands have done over the years and now it’s almost tradition to do it, so most of the bands slip one in.

The Popguns are not a band you have to ask where their name comes from. As soon as they hit the stage people were dancing along. 100% pure fun pop music with a nice indie-rock undertone. A totally enjoyable set and one of the nice things about the festival. Every year it seems a real eclectic mix of bands that should not work together somehow work, feelling like it’s the perfect logical thing that comes next, no matter how massively different it is. 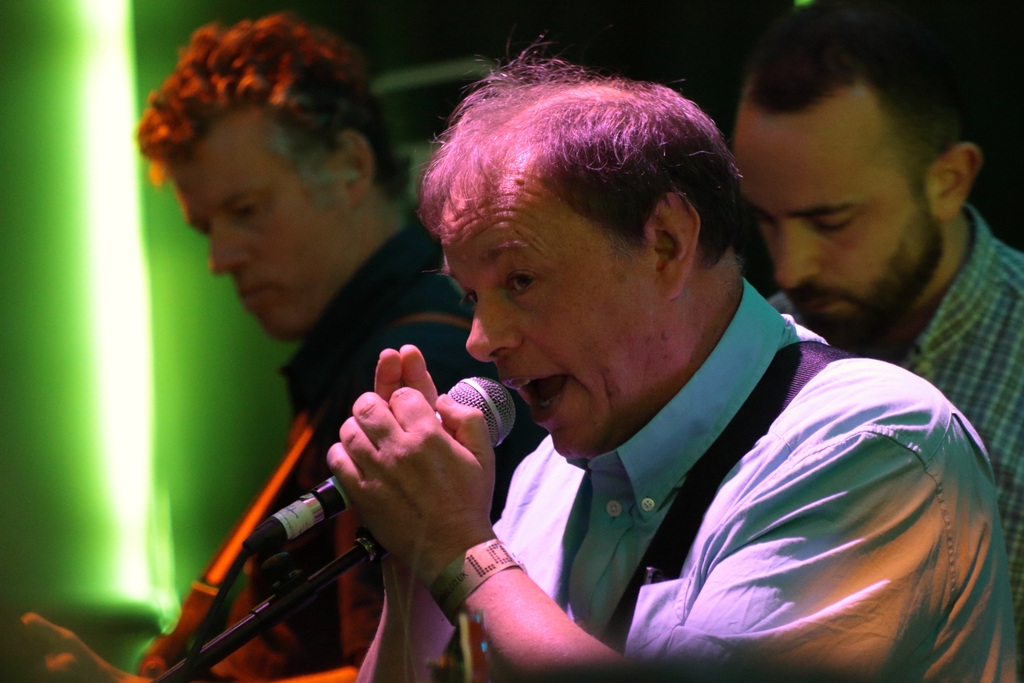 The Charlie Tipper Conspiracy was this year’s squeeze a large band on the small stage with the seven-piece, plus one extra guest on stage at the end. They started off with the Wedding Present cover, getting it out of the way and, as The Popguns had finished early, they had enough time to slip an extra song into their set too. They had a wonderful trumpet player and I often found myself getting lost in the music listening to him. Helen McCookerybook joined them on stage for the last song, which was a charity song they had recorded together to support refugees.

Flowers are a stunning three-piece from London. The singer and bass player Rachel had the most beautifully haunting voice that lulls you into a dreamland. Then the guitarist and drummer ramp things up to full-on rock. They said onstage that they always bring two of everything as they are always breaking things, often the spares too. It seems like they have ripped up the rule book too and have created a nice unique sound that captivated the whole audience. The whole show was like a great roller-coaster that twisted you around but in a fun enjoyable way.

Helen McCookerybook had the tough slot, the day was getting on and it’s all getting a bit of information overload after a good few hours of non-stop new music. So a folk singer/songwriter was going to be a tough sell for me as it’s not usually my cup-of-tea. If she doesn’t mind me saying, Helen has been doing this for a few years now and knows how to play a crowd. Shortly into the set she played a fun song about Facebook watching you and later a song she recorded at 19 about getting made up like in the teen mags. With nice little intros and a good collection of songs she kept the bar packed and even had the whole place singing along, making the place feel like a proper folk pub gig. To round things off she played ‘On Heaven Road’, a song she said was written on New Church Road while tripping.

With that thought in the head it was time for the half hour disco break. This year called Missy Tassles’ Exotica-A-Go-Go Disco! With The Sleazoids singer spinning the records. Then David Gedge, with dog, picked the traditional raffle prize winner before the main event.

Each time they play this festival The Wedding Present play one of their albums in full and in order. Tonight it was their latest album Going, Going…, which I got to know quite well when I reviewed it. It’s an album that gently builds and ends up with some classic rock tunes. I really enjoyed the first few tracks as I’d missed the Cinerama set and these songs are fairly in the same vein. 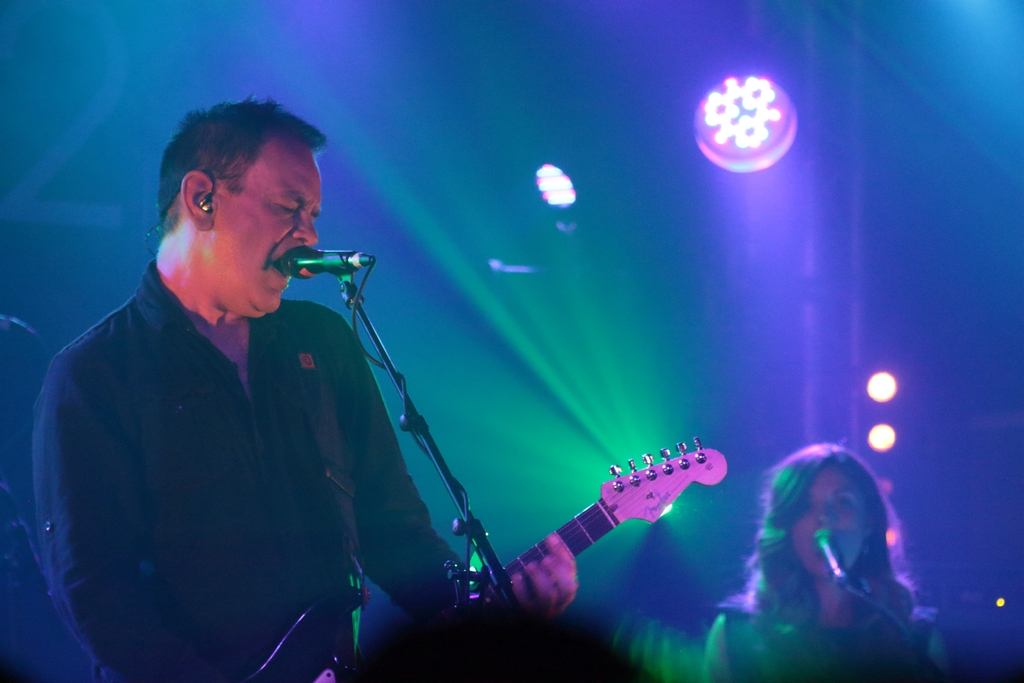 The tracks ‘Bear’, ‘Secretary’ and ‘Birdsnest’ brought the place to life and despite being released recently, everyone seemed to know them inside out like old favourites. It was good to hear ‘Secretary’ again as I heard it when the band played it for the first time at this festival a few years ago.

With the album out of the way it was on to the classics, starting off with ‘Kill Devil Hills’ and ‘Bells’. Then a good spread of tracks from over the years ending on ‘Brassneck’ and that wrapped up yet another At The Edge Of The Sea Festival. When I first came to the festival, back in 2014, I was not the most massive Wedding Present fan but having seen them here so often now that I’ve got to know their songs. Every year I enjoy The Wedding Present’s set a bit more than the last year and I may end up becoming a massive fan. I mainly like coming to the festival for the great collection of bands that they pull together and the nice seamless music, the Concorde 2 being the perfect venue for it too.

I’ll certainly be looking forward to the same again next year.