If only Brighton could be like this all year round. There’s nothing quite like flitting between the city’s venues, hearing live music bleed out onto every street. Sadly, it had to end – but not before a lot of good music was played in a lot of venues. The Alternative Escape has grown every year, and this year its lineup was a serious affair, although one journalist alone was able to take in precious little. 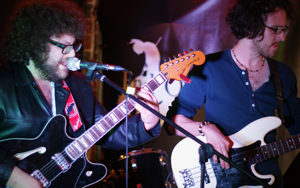 Thursday started off slow, but it did build to an impressive climax. Danny Toeman was the first to catch the eye, standing out from End of The Trail Records’ otherwise thrashing and heavy lineup with his set of stripped back soul. Hugely charismatic, his playful vocals were loaded with gospel and Motown influences. It made you wonder what he might be able to do with a full band, playing as he was with just guitar and bass backing.

Recreations, the spin-off project of Sam Duckworth (from Get Cape. Wear Cape. Fly), dropped jaws at Smithereen and Noiseysounds’ event. Using a cello and a loop pedal, he defied the limitations of his instrument, building soaring melodies to fill the room. He crafted a beautiful sound in such an intimate atmosphere, layering strings with eerie vocals.

After Warsaw Radio’s set at the Marwood, there was nothing to do but go home: nobody was going to top it. It was lilting and expressive folk played by a group of musicians who didn’t hit a bum note between them. The tiny room was perfect for their sound, soft vocals backed by strings and rolling drums. It would be hard to hear them play and not feel uplifted and musically sated.

Although some thoroughly good groups played across Thursday, the day felt noticeably like a warmup for the real weekend. In terms of the sheer number of quality bands, Friday was a step up. Dan Shears appeared at the Black Lion with his Velveteen Orkestra, right after Normanton Street. It was a surprise to see a fully orchestral group in the habitual haunt of the DJ, but nobody complained: they were all stellar musicians, and Dan’s spectral vocals only made them more unique. 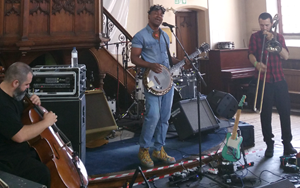 Blick Bassy at One Church was a real highlight. His afro-folk style was utterly refreshing, his voice powerful but supple over strings and a trombone. His group was so far removed from your standard band setup that his set existed in its own sphere, in the context of the weekend. His personality and Cameroonian heritage came through with his earnest interactions with the crowd, lending him a great deal of charm as well as talent. There was nothing even remotely like his set in the whole city – all those who missed it, missed a treat.

Also appearing at One Church were the Moulettes, perhaps the most striking band of the entire festival. Anybody who hasn’t seen them, should do so immediately – they are wildly original and hugely imaginative, using cello and a jacked-up bassoon as lead instruments. They heavily previewed material from their latest album, to be released on 27th May, which looks to be an oddly shaped and abstract, but playful and affecting, concept album. 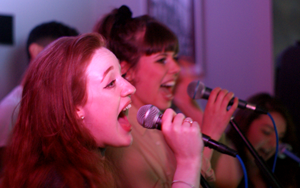 Fresh Like Dexie topped off the night with a set for Brighton Unsigned. They crammed onto the stage and moved the crowd with a soulful and funk-laden sound that was perfect for the later time. Both singers had strong voices, and the keys players worked wonders, although the levels were so high that it was impossible to hear the whole set without risking damage to the ears. In any case, their set, after so much music throughout the day, proved musically exhausting.

With a few exceptions – notably Acid Box’s all-dayer, and Hookworms’ concert with Dictionary Pudding, which were reportedly of consistently high-energy all day – Saturday seemed to be a climbdown from Friday’s intensity. The quality of musicians remained high, but the strain of all the gigs started to show, on band members and audiences alike. That being said, the festivities continued, for many, long into the night, although the Alternative events tended to shut down around midnight.

Stumbling across Lion Bark was a very happy accident. They’re a breezy take on indie and folk, but they played with an electricity that doesn’t stand out from their recorded material. Give them a full room to play to, and apparently they will easily captivate it. Put them on your list of bands to see live. As for a party, the Fiddler’s Elbow Street Party was the place to be on Saturday night, with an unbeatable atmosphere – although outdoor sound always has its challenges.

The other musical highlight of Saturday was Time for T, a band whose reputation preceded them – but who exceeded expectations. Again, their live show smashed the impressions given by their recorded material: live they were more energetic, free-form and absorbing, and they transformed the Marwood into a swaying, writhing mass, with a distinctly tropical feel. By the end of their set, most of the Alternative events were slowing down – but their set was enough for most.

It was an exhausting weekend. The festival has now grown so much in size, and equally in quality, that it was impossible to take in more than a fraction of all that was on offer. Among the many great appearances, the Moulettes stood out as the best single performance of the weekend. For a venue with a consistently good lineup, the Marwood takes the crown, with a full three days of exceptional acts: really their musical programme could have stood up alongside some of the best official Great Escape events. Many great performances and venues remain off this list, almost certainly unjustly – however there was simply too much quality music to see. In itself, that is a testament to how impressive a festival the Alternative Escape has become.
Ben Noble