In 1987, Leeds band The Wedding Present, riding high on the buzz generated by a number of self-released singles and the support from the likes of Radio One DJ's John Peel and Andy Kershaw, released their debut album, George Best, also on their own label, Reception. It featured a now iconic image of that equally iconic footballer of the same name on the cover, and became a minor commercial success, scraping the top 50, and cementing the band's reputation as one of the best around, one who was spearheading the so-called 'indie' scene that had slowly grown out of post-punk, and which had been encapsulated by the legendary C86 cassette that the NME gave away with their weekly print edition. Dubbed 'the most indie thing to have ever existed', most of the bands on it subsequently faded away into semi-obscurity. Bands such as Might Mighty, The Bodines, Bogshed, and Close Lobsters. However, along with Primal Scream, The Wedding Present have, with the odd blip or two, stayed the course. In 2018 they are as highly revered as ever: they’re still releasing records, curate their own annual festival, At the Edge of the Sea, now in its 10th year, and even have a new film documenting their early years, Something Left Behind, to celebrate.

What is it about Brighton, and its fertile music landscape? Surely, there must be more musicians per head of population than anywhere else. Every other person is in a band it seems. Certainly BIMM has been a major factor, but so has The Great Escape, and Brighton's cultural history, a place invariably viewed as one to go to for the purposes of pleasure and entertainment. In particular, guitar-orientated music has been fruitful of late. Bands such as Tigercub, Black Honey, The Magic Gang, and Dream Wife all started here, a springboard to bigger things. There is definitely something in the water down here.

When she was just 17, Natalie Merchant was working in a health food store and was considering a career in special education whilst at college in her home city of Jamestown, which sits just below Lake Erie that straddles the border with Canada. Harbouring no more than your average desire to sing in a band, she was invited to do some vocals for a group called Still Life in 1981. They inexplicably decided to call itself Burn Victims, before settling on 10,000 Maniacs all in the same year, performing their fist gig under that name on September 7th. Named after the obscure 60s low-budget grindhouse splatter flick Two Thousand Maniacs!, and often cited as one of the worst band names in history, 10,000 Maniacs nevertheless became huge on the alternative college circuit, as well as finding an early fan in the shape of John Peel, who turned on his radio listeners to the band via their song 'My Mother The War'. "The only solid plan I had was to go to New York City to attend art school," says Natalie Merchant. "I wanted to be an artist and in the end achieved that goal."

"Bands are weird things, they have their ups and downs," says Mark Chadwick, lead singer of The Levellers, Brighton's veteran survivors of a ruthless music industry, and the most successful band to have ever come out of Brighton, with 11 albums under their belt (including a number one in 1995 with Zeitgeist) and 15 top 40 singles.

Jenny Hollingworth and Rosa Walton are still only 19, and have just released their second album, I’m All Ears, the follow-up to their stunningly inventive debut I, Gemini, which was written when they were aged 13-15, and was finally released just over two years ago. Born and bred in Norwich they first got to know each other when aged just four. “We used to draw together,” laughs Rosa, “and do other creative stuff and make short films together.”

Ladies and gentlemen, in time honoured tradition, it’s time for the bi-annual Brightonsfinest Half Year review. Every six months we ask our writing team to look back over the past half a year in order to pick out some highlights and to identify some great music that we’d somehow managed to let slip between our fingers. Every writer is asked to pick out the best album and best live show we’ve reviewed in the last six months, as well as an album that we didn’t manage to write-up. 2018 is shaping up to be a pretty solid year for new music, so far. We’ve actually reviewed over 160 new albums so far this year and sent reviewers to over 120 live shows!

As we look back it’s worth reminding ourselves of all the good stuff we’ve been up to at Brightonsfinest HQ. Our radio show and website have continued to go from strength to strength while we also launched our first foray into print. Our Brightonsfinest Music Guide’s seventh issue has just hit the streets of Brighton, paired with the Latest Brighton lifestyle mag, and it’s been great getting some much needed music-focussed reading into the hands of Brighton people. We’ve also just had our most successful showcase for The Great Escape festival, taking over St Mary’s Church in Kemptown with a buzzy line-up, topped with a stunning set and light show from local heroes Phoria. Head over to our YouTube Channel for our highlights video of the show. As things finally start to chill-out for the summer it’s great to cast our eyes back over the past six months to remind ourselves of some of the best that new music has had to offer, while we start scheming our next steps for the rest of 2018 and beyond!

The word legend is bandied about all too readily these days, sprinkled like confetti by beyond-themselves music fans and hyperbolic journalists. However, there can be little argument that Earth, Wind & Fire are exactly that. Proper legends. Titans of music. Giants of the form. They've won 20 Grammys, been inducted in the Rock'n'Roll Hall of Fame, and sold over 90 million records. They get me excited, see. And there's plenty of excitement in the air generally as they head our way to perform a Sunday headline slot at this year's Love Supreme festival.

Along with Leftfield and Underworld, Orbital were (and still are) masters of the dance universe. An act that not only made mind-blowing progressive dance-techno fusion, but who could properly do it live on stage, helped immeasurably by their improvisatory flair, and of course that distinctive torch on headgear look. 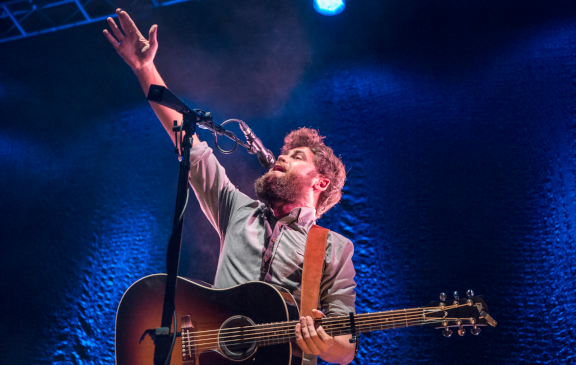 Mike Rosenberg, aka Passenger, took to his home streets of Brighton on a baking Bank Holiday Monday to perform a busking set, as part of a four-day busking tour of the UK. Using the opportunity to promote his Brighton show later in the year at the Dome, 9th September, and to talk up his forthcoming album, Runaway, which is out at the end of August, Rosenberg was in his element. Thousands congregated to witness the Brightonian doing what he does so well; singing and performing, with just a semi-acoustic guitar, and that appealing mix of self-deprecation, humour and heart-on-sleeve passion.