Those who have witnessed the intensity of an Ulrika Spacek live show will be fully aware of how mesmerising and transportive their gigs can be. Furthermore, like their debut LP, the London-based band have managed to retain this unique melodically-inclined kraut on record for Modern English Decoration – a phenomenal sophomore effort that picks up where they left off on The Album Paranoia. I caught up with Joseph Stone to speak about the recording process and what the future plans are for the five-piece.

The former Brighton-based BIMM student has just released his second album, the follow up to his critcially acclaimed debute The Fire Inside. Possessing a powerful, rough-hewn voice, writer of many a majestic and elegant songs, Sital-Singh has picked himself up after being dropped by a major label to deliver another beautifully crafted work. He took time out to talk to Brightonsfinest.

London based psychedelic garage band Dead Coast are certainly making their mark on the global scene since their debut album release ‘Shambolic’ last year. The foursome have just returned from a long and successful US which saw them grace the stage at none other than SXSW amongst other infamous American venues. Lucky for us, they are back home to share their unique sound.

For fourteen years, Brighton based DJ Format and Canadian rapper Abdominal have been making music on and off. Their new album Still Hungry is their first full-lenghth collaborative album, and it's packed to the gills with upbeat hip hop beats and grooves, albeit tempered by a grittier, harder sound, the music suplied by DJ Format (Matt Ford) and the lyrics by Abdominal (Andy Bernstein)

Talking over Skype, I had the chance to quiz the dynamite duo.

Part of the mid 2000s UK indie revival, Newcastle’s Maximo Park are one of its survivors along with the likes of Kaiser Chiefs and The Kooks. Their new album Risk To Exist is their sixth studio release and their sixth to make it into the top 15. They are a remarkably consistent band, born in an era when the internet hadn't quite taken the stranglehold it has now and when it was just about possible to score a proper hit, such as with 'Apply Some Pressure' and 'Our Velocity'. Their strong socio-political commentary is allied to a mixture of incendiary alt-indie and, more recently, post-punk funk and soul grooves. With the band about to take to the road for the beginning of a mini-record store tour to promote the new album, frontman and lyricist Paul Smith told Brightonsfinest about his love of records, why the band are still relevant and the maddening political landscape. Back in 2010 or 2011 (time sometimes blurs, does it not?) I was on a jolly courtesy of White Nights (the sadly no more arts and culture event that took to the streets, cafes and venues of Brighton in late October), who had an exchange thing going on with their French counterpart in Amiens, France, the idea being that a load of Brighton-based acts would showcase their wares to a French audience. Last on the bill, and in the very early hours of the morning, Soccer 96 took to the stage to a rapidly dwindling audience made up of a few friends and the odd French native. Not only did they instill a second, maybe third wind in me, but they completely blew the roof off with their out-there instrumental jazz, prog, space, punk, dance fusion. It was made by just two people; Dan Leavers (Danalogue) on analogue synths, and Max (Betamax) on drums. It was amazing and brilliant.

A few years later (last year to be more precise), The Comet Is Coming are on the telly, having been nominated for the Mercury Music Prize for their debut album Channel The Spirits. Apart from the band name the only real (but big) difference with Soccer 96 was that they now had the saxophonist Shabaka Hutchings on board, helping to expand their sound in the process but still with that aforementioned fusion at heart. As well as a special Record Store Day release, the Death To The Planet EP, they are hitting the road for a UK tour, as well as a date with Love Supreme festival this summer. So, it was a pleasure to catch up with Dan for the first time since that night in Amiens.

Sergio Mendoza is one of the great innovators of the Arizona music scene. He’s a composer, arranger, producer and programmer who plays keyboards, guitar, percussion and horns, and works with the cult American band Calexico, as well as Smiths/Morrissey tribute act Mexrrissey. He may be based in Tucson, but his inspiration comes from south of a border that is not blocked by any walls. With Orkesta Mendoza he sets out to update and enliven the Latin big band tradition, mixing influences from Mexico and across Latin America with electronica, strings and unexpected bursts of western pop and psychedelia. He has a sometimes brash, widescreen style that would have impressed Phil Spector, but there is impressive variety in his exuberant approach. So he starts with stomping, brassy dance songs, slows down a little for a grand, piano-backed ballad and then changes direction again for ‘Mapache’, with its witty reference to 60s instrumental pop. Classy and enormous fun.

I’ve kept my eye on The Orielles for a few years now, seeing them play in Brighton numerous times. After a string of singles and EPs, the band have now signed to Heavenly Records and have released their first single on the label ‘Sugar Tastes Like Salt’ which sees the band at their most refined but also starting to play around with their sound. They’ve started to shift away from the surf-pop tag that has followed them around for so long and are concentrating on developing their songs further. I met up with them in a small pub by Brighton’s train station to talk about the band’s beginnings and their future. They are a few dates into their current UK tour, which will run throughout April, playing dates all over the UK. 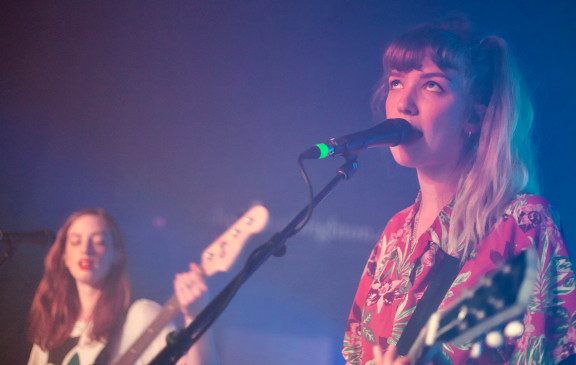 There were doubters. There probably still are. But anyone with an iota of musical appreciation should acknowledge that in Juliette Jackson, we have found a rare gem. A shining star who just knows how to write naturally, space and dynamic thrust at the fore, as a songwriter and a lyricist. Already universally acclaimed, Love In The 4th Dimension is a stunning debut album from the London/Brighton four-piece. Last year they played The Great Escape with two big shows and will be back on 20th April for a headline show. Jackson took time out from a bit of down time with her boyfriend in Rotterdam to talk SXSW, discovering guitar music, learning to write songs and being a waitress in a cocktail bar…

Best known as the singer and keyboardist with the hugely admired and much missed Stereolab, a key band of the 90s and one who helped introduce 'post-rock' as well as bringing analogue synths back into action. Sadier has been pursuing her own projects for the better part of ten years; firstly with her four-piece band Monade and now as essentially a solo artist. Her last three records bear her name, whilst the just released Find Me Finding You has been released under the name Laetitia Sadier Source Ensemble. Whilst Stereolab were largely about mixing lounge with krautrock droning and sing-song vocals, Sadier has broadened her musical palette in recent years, forging many new and sometimes experimental musical combinations, that sit alongside her continuing interest in political philosophies and ideas in general.