Indie music. What does that mean to you? Nowadays, the term is almost meaningless as it refers to any electric guitar based band that also sports the current haircuts and fashion. The Kooks are indie, right? Arctic Monkeys? Maybe… Indie, as originally defined, refers to music made 'independently' from major record labels, made on a DIY basis. The Wedding Present are an archetypal indie band. Not only did they release their first single on their own label, and which they self-funded, they received regular air play on the John Peel show, released 12 singles in one year, and dropped an album of Ukrainian folk songs on the folk market, albeit – and this makes the story even better – on a major label, and formed another band, Cinerama, in 1998, while The Wedding Present were on sabbatical, and which ended reverting back to The Wedding Present in 2004.

Influenced by the likes of The Birthday Party, Gang of Four, Orange Juice and The Fall, The Wedding Present soon developed a distinctive sound; super fast rhythmic guitar combined with a wall of aggressive noise or some jangly moments, along with almost invariably witty and colourful lyrical narratives,  For the earlier part of their career they were at the vanguard of the 'indie' scene, additionally taking on board some American hardcore and punk influences, with the result that The Wedding Present, helped along by Gedge's distinctive baritone voice, had created a fresh and invigorating sound, a style that was later borrowed by the likes of My Bloody Valentine, whose fast rhythmic songs and wall of noise bear more than a passing resemblance.


We all love Icelanders, don't we? For those who haven't visited (and that includes me) the Nordic country has a population bigger than Brighton but smaller than Bristol, is full of volcanoes, but actually not much ice, is considered one of the most equitable counties in the world, despite the fact it suffered particularly badly from the financial crash, and have some very peculiar laws relating too naming.
Familiar to some Britons for the so-called 'cod wars' of the 70s, Iceland practically fell off the map, as far as we were concerned, until the arrival of The Sugarcubes who featured one Björk Guðmundsdóttir (aka Bjork), who debuted in the UK singles chart with the classic 'Birthday' song in 1987. Ever since then, the most sparsely populated country in Europe has produced a seemingly never ending stream of unique, adventurous and high quality folk, pop and alternative indie sounds from the likes of Bjork herself, Sigur Ros, Asgeir, mum, Of Monsters & Men, GusGus, Hjaltanin, Olafur Arnalds and more recently, Samaris, a three-piece making big waves in Europe.
Read More...

So, what exactly is a Moulette? An inter-web search reveals nothing except this band and some rather unlikely reference to a hairstyle, as defined by the rather wonderful Urban Dictionary: the moulette is a stylized modern mullet, originating in Canada. It is essentially a curly combination of hat hair (in Canadian winters, hats are a must), the mullet and the famous hair swoosh (optional but encouraged)." Could this be the inspiration for The Moulettes? As Hannah Moulette (they refer themselves individually as a Moulette) has said before: "… I had a free haircut one day that turned into a mullet. We were joking that it was a moule-ette…." So, there you have it, a female mullet!
Not that they 'wear mullets' of course, that would be crass. Instead, they are a remarkably intelligent unit of musicality, sensitivity and adventure, a wild fusion of classical, prog, rock, pop and 'fantasy folk'. Comparisons are nigh on impossible but Bellowhead springs to mind or maybe the crazy alt-prog 70s rockers Gentle Giant (look them up!)? In any case, they make fresh and original music, helmed by the core unit of Hannah Miller, Ruth Skipper, Jim Mortimore and Ollie Austin, although the extended Moulettes family runs into double digits including recent recruit Eliza Jaye. Moulettes are female AND male…
Now based in Brighton, I went to visit Ollie and Hannah at their Queens Park residence, where a welcoming atmosphere of coffee and biscuit making was in progress, although Ollie is in tour preparation mode, which means he's off the booze and on the de-caff… And, almost immediately upon arrival a parcel arrived with a new batch of their bespoke Moulettes tea towels, designed by Hannah. Excitedly examining the goods, Hannah and Ollie give the thumbs up, a piece of band merchandise that apparently sells very well at their gigs (someone else once told me that their biggest seller on the merch table was mugs…), alongside the usual CDs.
Read More...

I was always intrigued by the Mojo Fins, ever since they first sprung on the Brighton guitar scene in the early noughties, their name to me an attractive proposition that suggested something akin to the 'blues' or roots music… Of course, the definition of mojo pertains to having 'charm' or casting a 'spell', and although this usually refers to sexual attraction, it is actually a byword for almost anything  – 'I got my mojo working…" As it happens they have almost next to nothing to do with the blues, but in terms of musical ability they definitely have their mojo on, as heard on the recent 'Circa' album, their third long player in a career that has encompassed major tragedy along the way…

"It's got a dull origin," claims Stephen Brett, lead singer, songwriter and guitarist with the band, "but at the time Jeff Buckley's 'Grace' was everywhere, and there's a track on there called Mojo Pin. His music caught the imagination of many people, and at the time I was obsessed by who he was and his music."

Stephen has just become a father, and inevitably the conversation takes a detour down that route as it is obviously something that now demands much of his time… "He's adorable, I love it, and I feel a complete addiction to him," he beams.

Since 2006 The Great Escape has established itself as Europe's leading showcase festival and music industry convention, featuring over 350 artists from around the globe over three days. About 35 venues are used including unusual locations such as museums, the beach shop fronts and hidden spaces. In all there are 650 live performances, attracting 13000 music fans and 3000 music industry delegates. The City is alive with the Sound of Music!

Since 2006 the likes of Adele, Mumford & Sons, Haim, Jake Bugg, Tini Tempah, The Maccabees, Foals, Friendly Fires, Laura Marling, Bon Iver, Vampire Weekend, Kasabian, White Denim, The xx, Chase & Status, Warpaint, Ed Sheeran, [Alt-J] and Disclosure have performed at the festival. This year expect to see the likes of Kaiser Chiefs (playing a secret show), Kelis, Wild Beasts, Little Dragon, Dry The River, Future Islands, Clean Bandit and Jon Hopkins performing, spanning almost all genres of music known to man. Just as importantly the Great Escape presents a fantastic amount of new and up and coming acts, all of whom are considered 'ready' to take a further step up.

I managed to meet up with the two lead singers from Almighty Planets – Noah and Ally at the quirky Marwoods Café in the south Laines last week. The energy and finesse they exude on stage certainly came across in the interview. It was an absolute pleasure to meet them both as they’re both passionate about what they do and hilariously funny at the same time. Not only is their music and live performance electrifying, but the band’s friendship and deep affection for each other makes Almighty Planets a really unique and special collaboration.
Read More...

Looking for a heartening success story in the fickle world of rock and pop? Thinking it’s all about instant impressions and catering for nano-second attention spans in this era of reality, instant success TV? Then look no further than Mike Rosenberg aka Passenger, who after years of patiently chipping away has suddenly seen all that perseverance, talent and passion pay off. 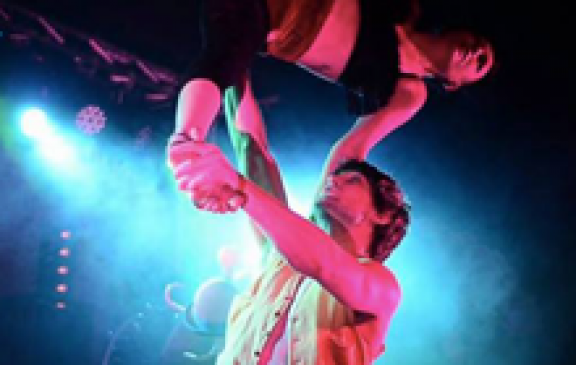 The whole idea of Gypsy Disco is that we want to bring people together and to make it something more than just a club night. We hope to create a sort of playground where people can explore and interact with the night as well as with people which is why we have created a variety of structures and areas for our audience members to immerse themselves with. Within the collective we emphasise a policy of ‘no ego’ whereby we are all the same regardless of what role we have, this we hope is then transgressed within the event as we show we don’t take ourselves too seriously which I think is important to make everyone feel comfortable and relaxed.

For those who have been living in the Brighton area this last decade you’ll probably have come across British Sea Power, a quintessential INDIE band in the old fashioned sense of the word, purveyors of non-mainstream guitar based music that generally paddles its own canoe, never quite following the diktats of current fashion or flavours; where virtuosity is not a pre-requisite of authenticity or quality. Alternative is perhaps an appropriate single word summation of this band who have dabbled successfully in the sub-genres of punk, lo-fi, noise pop, post-rock and melodic rock whilst managing to stay within the general confines of what we know as pop and rock.