Field Music
One of the few bands to outlast the indie guitar band explosion of the mid-2000s, Field Music’s un-selfconscious, anti-fashion stance has seen them compared to the likes of Steely Dan, Todd Rundgren, Scritti Politti, Talking Heads, Peter Gabriel and XTC. .

Nine years on from her debut album with The Mighty Mocambos, Gizelle Smith is back – and with an album that was worth the wait. Bringing together classic soul and modern funk, she showcases her now fully-formed character across 40 minutes of crisp basslines, sharp horns, and take-no-prisoners vocals. 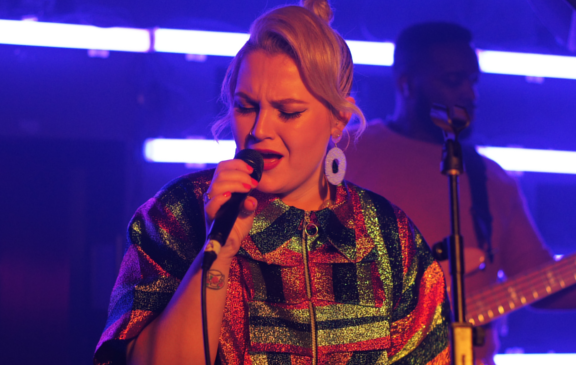 Although a Brighton native, Elli Ingram doesn’t often play here. Speaking to us just before the show, she told us it’s because she wants every hometown show to be special, and to be able to give everything to her crowd – and she wasn’t kidding. Her performance was a moving return to a loving audience, where, straddling soul, jazz and hip-hop, she delivered an exceptional rendition of her debut album Love You Really.

There was never any question we’d go to see Moses Sumney’s first Brighton show. His debut album Aromanticism, released in September, is a remarkable literary effort from a writer and composer who shot straight to our highest estimations. The question was always going to be how he would translate an album which we called “exquisitely composed” into a live performance – although anyone in the crowd last Monday will tell you, we needn’t have worried.

A hush fell over the candlelit tables as Sumney’s guitarist took to the stage with a loop pedal for the opener ‘Self-Help Tape’. Harp-like, airy and ethereal, he set the scene for Sumney to walk out and begin his winding and ghostly lyrics. Although not an exaggerated performer, Sumney had a quiet command of the stage as the room hung on his every note. The softened, almost folk-infused soul of this track is typical of the album, which situates itself between the waking and dreaming world. It built to a chugging climax before breaking to the downtempo sway of ‘Don’t Bother Calling’, and both Sumney and the crowd settled into the show.

All it took were four different microphones and a loop pedal, plus his guitar and sax player, for Sumney to straddle a huge range of sounds. From the unadorned natural clarity of his voice in ‘Indulge Me’, to the elaborate rolling harmonies of ‘Lonely World’, to the old soul exertions of ‘Make Out In My Car’ – where he also sang along to a Zappa-style jazz guitar solo – he displayed the invention and imagination in his singing that makes him absolutely unique.

While some of the nuances of the album were lost live – it’s a piece of work that rewards close listens and whose lyrics require some digestion – it nonetheless yielded an entirely new enjoyment in its performance. Sumney’s vocals were just as considered and wide-ranging, with some small but powerful additions: there were the achingly lingering notes of ‘Quarrel’, the sliding climaxes of ‘Don’t Bother Calling’, the raw emotion of his Bjork cover and the stripped back, whispered confessions of ‘Plastic’. It must be a challenge to replicate an album so exquisitely put together – ultimately he not only replicated, but refreshed the recordings, giving us something new with a mixture of ingenuity and pure passion.

His work with the loop pedal was excellent. Aside from unlocking a breathtaking array of vocal possibilities, he used it to emphasise the tension that hangs over much of the album, playing with crescendo and catch-and-release drama, using his voice as a many-layered instrument. He would tap percussion on his own microphone, as in ‘Doomed’ (which has no drumbeat on the album), or his final number ‘Everlasting Sigh’. This last song, an earlier release, saw him act as a one-man-band, building up the song from nothing with his hands, fingers and voice. He ended on an uplifting climactic note, which was amazing to watch, performing vocal riffs off the audience’s claps, then clicks.

His standing ovation was well deserved, as he confirmed the suspicions aroused by his album: Sumney is a rare talent, his flawless songwriting compounded by an instinct for an arresting live show. He can’t come back to Brighton soon enough.

We’ve been waiting for Ibibio Sound Machine to return to Brighton since we saw them at The Great Escape earlier this year. They finally obliged, showcasing the worldwide musical fusions at The Haunt of both their albums with an irresistible flair.

Both on the stage and in the stalls, the Tru Thoughts party faithful was out in force for a celebration of all the label has achieved. New blood stood on the same bill as their most celebrated acts – and in a twist of birthday traditions, it was the audience who were given gifts in the form of long-hoped-for collabs.

Originally commissioned in 2015, GoGo Penguin resurrected their original score for Godfrey Reggio’s cult film Koyaanisqatsi for one fascinating night at the Dome. With the progressive jazz trio playing live to the film, it was a rare and artful performance, unlikely to be repeated any time soon.

Every time Jordan Rakei comes to town, his show sells out. You couldn’t move for fans eager to see him perform material from his new album Wallflower for the first time in Brighton – an album which has seen the 25-year-old singer push beyond the narrow classification of ‘soul singer’.

Snapped Ankles made a doctrine out of rave, for a show that captured the spirit of the alternative dance scene. Performance art met the cathartic energy of post-punk, in an unreal but welcome subversion of the norm.

Balancing defiance with hope, Ibeyi’s 2nd album Ash is an unambiguously successful return for the duo. Their explorations of music and culture’s interplay continue on an album that has the power to both purify and galvanise.

While hardly new territory for Zara McFarlane, her third album Arise is her most complete exploration yet of jazz and traditional afro-Caribbean music. Born out of both her experiences in Jamaica, and her life at the centre of the London jazz scene, it brings together the two genres with a fluidity that makes them seem the most natural of partners.