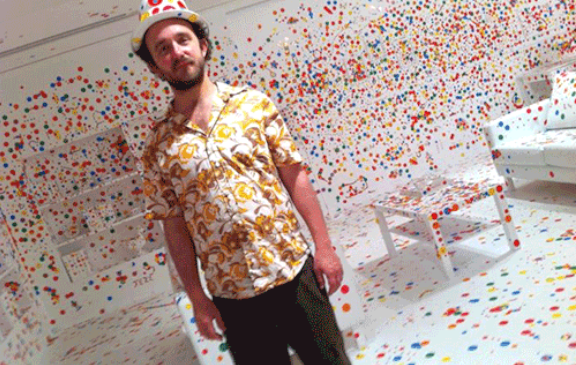 Last Friday after a hard days work in the office the BrightonsFinest team decided to make a rare group excursion to nearby Lewes having heard that wonderful Mr Sam Walker was going to be providing an evening of solo entertainment – a proposition so enticing we were prepared to miss the England game. I’d first encountered Sam, and the Lansdown itself, nearly 10 years ago when his old band Turning Green used to turn the pub into a thumping little sweatbox. Since then Sam has been very active in the Brighton music scene as well as touring all over the place in various guises. Besides his impressive solo performances he performs his own material with a large shifting ensemble group called The Muel as well as playing drums for Arthur Brown, John Watts (he’s a member of the new lineup of Fischer Z), Shona Foster, Matt Gest’s Boogie Woogie Troop and probably many more.

It was an unseasonably rainy night for Flash Bang Band’s album launch at The Green Door Store on Sunday so I was tempted to remain cosy at home, but if I started the autumn that way I wasn’t going to get to many gigs and the line-up looked fantastic so I forced myself out into the bleak night. I arrived a couple of songs into P For Persia’s set, and I could hear them from halfway down the road. I’d seen the name around a lot but never heard them, so I wasn’t sure what to expect. P For Persia are the loudest 3-piece I’ve seen in a long while! They comprise of a drummer, assisted by a drum machine and electronic pads; a guitarist, running some insane sounding effects; a synth-player, with some of the dirtiest bass sounds I’ve ever heard; and two exuberant vocals (from the mouths of their guitarist and synth-player). The music was crazy, bombastic and hard for me to pin down on the first listen. They stood out from many experimental electronic rock groups by performing with smiles on their faces and an infectious sense of enjoyment that was perfect for setting-up the rest of the evening’s entertainment. I look forward to seeing them again sometime soon.
Read More...

I arrived at the back of a packed Green Door store for She Crazy’s single launch to catch the last couple of numbers from Kill Moon, who seem to be a very exciting proposition indeed. A female fronted four piece described invariably as ‘noise pop’ around the web – these guys were certainly making an impressive racket. Loud, distorted and angular but underpinned by memorable song-writing (an increasing rarity nowadays) I think Nirvana would be a good comparison, and not just because front-woman Izzy Bee Phillips seems to be sporting Kurt Cobain’s haircut from the Smells Like Teen Spirit video. There are a heap of other influences on display here too, as evidenced by some superb guitar playing and guitar sounds coming from lead guitarist Chris Ostler (I imagine bassist Tommy Taylor had some cool sounds too, but it was reduced to a bit of a sludge by the sound system). I’ll definitely be checking these guys out for a full set when I get the chance.
Read More...

It was a great lineup for the last BrightonsFinest night at Sticky Mike’s Frog Bar (which is moving to The Hope next month); O.Chapman (who I unfortunately missed), the hotly tipped Richard Allan II, promoting his new EP and Brighton favourites The Mojo Fins, playing their first gig on a Brighton stage in almost a year and debuting several new songs from their forthcoming third album. There was a real buzz about the place, with fans eager to hear the new direction The Mojo Fins have taken. Last year they released ‘The Spirit EP’, a beautiful, gentle collection of acoustic songs; so when BrightonsFinest shared new track ‘Exhale’ on their playlist they must have really surprised people. Full of electronic beats and synths, ‘Exhale’ is quite a departure and I, for one, was eager to see how the band would go about this live.
Read More...

I was intrigued when I saw Moulettes and The Sly Tones were sharing a bill so I made my way down to The Haunt to see if it would work! Admittedly I’d never seen Moulettes before, or listened to much of their stuff. I had vague ideas of them being a fairly esoteric folk group so I was imagining a real clash when they came up against the Sly Tones brand of progressive rock music.

I had a small window of opportunity to catch Simonne & The Dark Stars supporting Dr Scardo at The Albert last night. We’ve been hearing their name a lot at BrightonsFinest HQ recently so I was dispatched to investigate. Simonne is an excellent pianist with a distinctive vocal that immediately made me think of PJ Harvey’s recent ‘Let England Shake’ record and Kate Bush’s wonderfully eccentric approach – a dramatic style that suited her piano-driven melodic songs. She was joined onstage by The Dark Stars – Mark Robbins on bass and backing vocals and Billy Poole on drums, who did a great job providing a solid backbone to the music. Robbins made some creative choices with the bass, playing some fantastic slide-bass on the opening song, using what looked like a small beer bottle, and later in the set it sounded like he was using a pitch-shifter, perhaps to compensate for the absence of guitarist Andy Small.

The band was joined this evening by a multi-instrumentalist who was introduced as Jules, “a one man junkyard orchestra”, playing the saw, shakers, harmonica and a tiny saxophone-like instrument that sounded quite Middle Eastern to my ears. Jules turned out to be an excellent saw player who not only used a bow to create haunting string-like sounds but also used it as a percussion device, using the teeth of the saw to sound almost like a guiro and hitting it with a spoon to make a combination of the two! He got some fantastic noises out of it, but I must confess towards the end of the set I felt he could have eased off a little or perhaps I was just missing the clarinet parts I’d heard on their soundcloud page (http://soundcloud.com/s_thedarkstars).

The band seemed to take a couple of numbers to get into their groove and I felt the arrangements of a couple of songs slightly too long at the start, but by the end of the set they had me and the whole crowd in the palms of their hands. I was ready for a storming finale when the soundman told them abruptly that they had over-run and had to stop: very frustrating! I’m look forward to seeing this band again and watching their sound develop, those hats are brimming with potential.
Adam Kidd

On a miserable, windswept Brighton night I head down to Sticky Mike’s Frog Bar for the first monthly night from BrightonsFinest. Stepping inside the atmosphere is warm and welcoming and the stage is attractively dressed with village fête bunting, fairy lights and a merch presented in vintage suitcases. We are soon treated to a promising set from Bournemouth band Willowen, these guys are young and fresh-faced but have an impressive list of support slots on their CV (including Moulettes, Paul Heaton and KT Tunstall, who they cover in their set). As the band perform it is clear why they got the bookings, as musicians they are accomplished beyond their years. The trio play an upbeat folky set combining acoustic guitar, violin and percussion with lots of vocal harmonies and a sunny disposition. It’s a charming, buoyant start to the night and I expect they will go far!
Read More...

This years' One Inch Badge's 'Sea Monsters' Festival was an early entry in my diary after being enticed by the fantastic line-up featuring; Abi Wade + The Holy Vessels/Plasticine/Jacko Hooper.

The night opened with the wonderfully delicate Jacko Hooper. With a beautiful voice that lingers in the air like cigarette smoke from a 1950's film, Hooper captures the audience with his gentle melodies and lyrics that tell poetic tales of love and lost love. 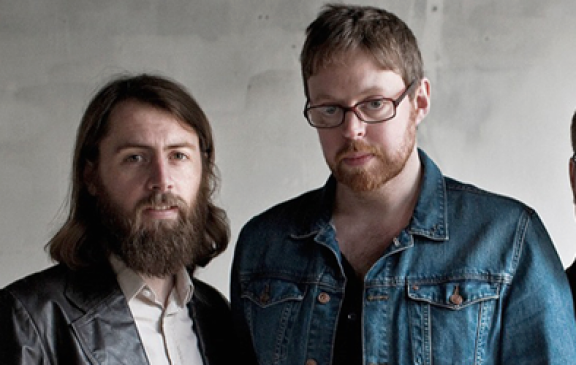 I’d been looking forward to The Mojo Fins Old Market show for weeks, so it was a great disappointment when I saw online that band were being forced to pull out due to illness. It was a shame as I hadn’t seen the group play live in a long time – I was eager to see them in such an elegant setting and hopeful we’d be hearing some of the new material they’ve reportedly been working on. Luckily the line-up for the night was so strong I wasn’t perturbed, and judging from the excellent turnout few people were: extended sets from Apples & Eve and Shona Foster were still a very enticing proposition. I even spotted the uncontaminated members of The Mojo Fins sitting in the front row enjoying the entertainment!

I arrived early for ‘Why?’s welcome return to Brighton’s shores and was treated to an intense introduction to support group ‘Young Fathers’. Rappers Kayus Bankole, Graham Hastings and Alloysious Massaquoi were joined live by an anonymous percussionist with a single floor tom and a pair of splash cymbals to beef up the backing tracks they sang over. These guys were absolutely committed to their performance and locked audience members with thousand-yard cold stares between fits of exuberant dancing. Their commitment onstage sat well with a well crafted set of interesting tunes, great arrangements and fantastic voices: switching from heavy lyrical raps to surprisingly tender soulful vocals, definitely ones to keep an eye on.