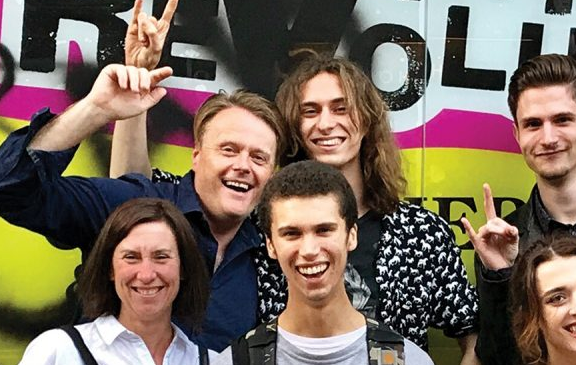 A true lynchpin of the Brighton music scene for many years now, Simon Parker has promoted hundreds of gigs (under the Cable Club name), been in loads of bands, and generally been the go-to guy for all things music. He’s now bringing that deep knowledge and love of music back to Brighton in the form of Vinyl Revolution, which opens to the public on 15 July.

What is Vinyl Revolution?
We like to describe Vinyl Revolution as a new record store, opening in Duke St, Brighton on Saturday 15 July. We have a great mix of both new and vintage records which is not often attempted in Brighton. The shop’s design is eye-catching and memorable and our staff are welcoming and friendly. The vibe is upbeat and I can safely say there’s not another store like it!

Why are you doing this now?
Because this is the moment I have been waiting for! I started collecting vinyl back in 1979 and 2017 feels very similar. Great artists just waiting to be heard on the format music was invented for! To be doing this in Brighton is a dream come true. It feels great to be back. And Brighton have just gotten into the Premier League. I think this shows great timing on both our behalves.

Why and when did you leave Brighton, and how pleased are you to be back?
I lived in Brighton for 21 years as a musician and promoter. During that time I saw a lot of record shops come and go. After taking the opportunity to set up a vinyl division for Truck/Rapture in Oxford I left town for nearly three years. Following a boozy night with my partner Rachel in June 2016 we decided to start our own store, in a way that we would want to shop for vinyl if living in a perfect world.

What is it about Brighton that is so damn great?
Brighton welcomes individuality and creative ideas. It is a magnet for misfits and free-thinkers. It’s by the sea but it’s partly surrounded by the downs. In terms of music and fashion we’re years ahead of everyone else.

Vinyl has experienced a big resurgence of interest these last few years. How can you explain that?
It’s tactile, sounds great and is totally addictive. Once you start collecting you can’t stop. There will always be another record waiting to fill a certain hole in your library. And this applies to all age groups which has helped the vinyl resurgence gather a lot of momentum very quickly. Streaming has its time and place but people now want to go out and own the records that mean the most to them.

What else will you be stocking?
We’ll be selling our own range of art prints, ethical and environmentally-friendly clothing and stuff for the home. Our range features designs around quotes straight out of pop culture. Dylan, Bowie, Sid Vicious, Lemmy, Madonna, Boy George and many others are all featured. It’s a unique slant for a record shop. We also sell quality record players, amps and speakers. We do not sell all-in-one players as they are generally rubbish.

Tell me about the live aspect of the shop
We will be staging in store live shows, signings and music documentaries when we find things that we feel are of interest. These events may not always be music related but will be of creative and/or artistic merit.

You are well known as being a promoter over the years, particularly the Cable Club. Can you tell us a bit about that?
After playing in Brighton bands from 1993-2002 I decided to start a night (Cable Club) that gave local bands a decent platform. At that time, most local nights had no respect for genre or quality. Cable Club changed that and ended up running from 2002-14, in which time I worked with thousands of bands. I brought Kasabian, Keane and The Cribs to town for their first-ever Brighton gigs and also had the pleasure to work with a lot of great Brighton based acts. The Kooks, The Maccabees, Brakes and Bat For Lashes were all highlights.

And you’ve been in many bands over the years. Do tell…
I still play with Villareal, Lightning Dept and White Star Liners, just not as often as I used to. Villareal have, to date made four albums whilst Lightning Dept are set to release a second album ‘Hello Iceberg’ towards the end of 2017. White Star Liners supported Grandaddy on several UK tour dates which was another career highpoint. Before that I played with Colourburst and Fruit Machine.

You also wrote a book about these experiences?
Yes, I wrote a book entitled ‘The Road To Nowhere’ which sold out of its first print run (through Brighton-based Invocations Press) back in 2015, and is currently being updated for a second run later this year. It’s a very light-hearted look at the fiasco of me trying to get my band(s) signed. There’s lots of lists of long forgotten artists and records too. Basically, anybody who loved indie music between 1984-2000s will find it of interest (I hope!).

What is on your radar at the moment, music wise?
Locally there’s Sea Bed and Dog In The Snow. On a broader scale I’m looking forward to the new National album and really like the BNQT record.

If you could see any artist(s) dead or alive, tonight, who would that be?
The Cure. Always The Cure.