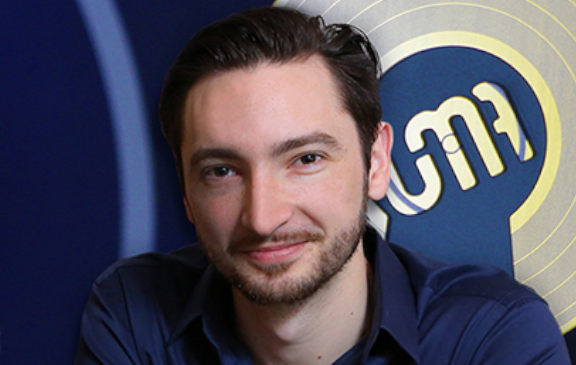 Next year, The Great Escape (TGE) will host the Unsigned Music Awards (UMA) at Brighton Centre, on Wednesday 16 May. Established just two years ago by former BIMM students Simon O’Kelly, Georgina Thomas and Ben Connor, the first ceremony in 2016 at the Troxy Theatre in London proved to be such a success that TGE’s parent company, Live Nation, who are the biggest live music promoters in the world, decided to hook up with this exciting and ambitious start-up. With almost all the big movers and shakers in Brighton for this year’s TGE, as well as hundreds of outstanding new bands and artists, Brightonsfinest took the opportunity to talk to Simon about UMA and its plans for next year.

How has your TGE been so far?
It is the second day (Friday) of the Great Escape, and last night was a celebratory night for us. The Wednesday night we just had, represented a year to the day before the big event next year. Yesterday we were filming all our promo. We had our host from LA (Nicole Arbour) fly over to do this. It was a long day up to 8pm, and then we went out and caught lots of bands. Today, I’m a little bit delicate!

See anyone you liked?
I saw a wicked band, (the Brighton-based) Yonaka, at Patterns. Incredible. The guitarist smashed his eye on the guitar! There was blood. Rock’n’roll!

We are hosting a stage tomorrow afternoon at Prince Albert. It’s part of the Arts Development aspect of TGE. That was to give us a bit of grounding with TGE, rather than just say, ‘By the way, we’re coming next year’.

You’ve actually got some music background yourself, here in Brighton?
I played at the Prince Albert! I went to BIMM in Brighton in 2006.

What is your role now?
I am CEO of the UMA Music Group. We began as the Unsigned Music Awards. Three founders: myself, Ben and Georgina. We all fell into the roles that we were strongest at. Georgina is chief of operations, taking care of the day-to-day running of the business. Ben comes from a TV production background, and deals with the content side of things. I drive the business development angle, and the bigger vision of what UMA can become.

Tell me about how it all started.
It was literally just two years ago we conceptually came up with UMA. After a festival we sat down and said, ‘Let’s do this’. We knew from day one it had to be televised, we had to have major media partners, industry backing, major venues, and take unsigned to a level it’s never been before, to provide a platform that can really change the direction of the career of an artist. The moment you put it on TV, and you have celebrities endorsing it, and you have industry in the room, it changes what it is. It has to be a business. You’re here to support artists but it has to be a sustainable business and be attractive for brands to want to be involved. For the artists it is completely free to be involved with, otherwise it takes it away from being legitimate.

Can you give me an example?
I’ve just been to see Mullaly (who performd at Patterns, as part of TGE). Our first awards show was in October last year, and in January of that year he started releasing new music. His video – that I only found out yesterday he uploaded himself – is just him in his bedroom with a guitar. That’s it. He won Best Male Solo Act at the awards and is now signed to Atlantic. We are catching people really early. We’re not taking credit for that signing, but what UMA does is provide that platform where people will know who these artists are. And to overturn the perception of unsigned, which unfortunately peope do perceive to be ‘bedroom’ acts or ‘pub’ bands. These are seriously genuine artists. We interviewed Ray BLK yesterday, the BBC Sound of 2017 winner, who is proudly unsigned. Artists are choosing more and more to remain unsigned and exploit as many revenue streams and angles as they can before they sell their rights to a label. There are so many other ways to do it now.

What does UMA Music do now?
We began as an unsigned music awards only, that’s where the concept came from. But as we went through the progression of speaking to the industry – publishers, booking agents, licensing companies – we began to get the picture that we were quite relevant. The conversations began to emerge of, “what else are you doing apart from this awards show? You’ve got this great pool of talent”. It grew from there. We announced an investment fund in conjunction with Steve Pell, who was Calvin Harris’ Business Manager for five years and also managed Pele’s image rights. He is an intellectual property and tax specialist. He had an idea for an investment fund that would champion new music, investing up to £100,000 in an artist, but on their terms. So they are self-signed to their own record label, and we invest through that record label. That was stage one. We now work heavily on content production, where we film sessions. We’ve got an online magazine, UMA Music, which Joe Philip is the Online Editor for. We started getting lots of influx from press and PR’s, and artist’s themselves. We had nowhere to feature them except for the blog, so we created an outlet, which we are driving to be one of the world’s go-to platforms to discover new music.

What qualifies as ‘unsigned’?
A lot of these acts will have a booking agent and publishing, but won’t have a third party record label. That is our definition, which qualifies for UMA.

Is Ed Sheerhan is a prime example of an unsigned artist doing it for themselves?
We spoke to Simon Aldridge of BMI (leading music rights management company) and he was saying Ed Sheerhan was at every single industry event, hanging outside, waiting to talk to people. He was always grafting. People were saying, ‘Who is this guy’? Then suddenly it’s, ‘Shit, that’s Ed Sheerhan’! People don’t realise he was there and he was grafting. Artists are now doing that all day, every day. The awards shows that exist aren’t created for the unsigned sector. They are created by the BPI and are there to facilitate the majors. It’s a marketing tool as much as anything else, to facilitate the charts. We can all realise now that the charts aren’t really true to what they once were. Talking about Ed Sheerhan again! (In reference to his recent 16 songs in the top 20…)

Tell me about the first awards show
We did an awards show in October 2016, at the Troxy Theatre in London. We were with a company called SWG who run 12 stages at Glastonbury. We had nine live performances and sixteen award presentations and a special award called UMA Icons at the end of the show. There were 1500 people, including 300 VIPS from the music industry. The live acts were broad in our selection in what it means to be unsigned. All the categories are recognised, from country, urban, jazz, blues, rock, electronic, folk. Then we have more specific categories like Best Songwriter, Best EP, Best Music Video. We also have two international categories. We will be focusing next year on more digital aspects. For instance, we’ll have a Best Live Steaming Award

How does the judging work?
Last year we had a panel of 82 judges, from a range of industry including major label A&R, Spotify playlisters, Guardian and Times writers, publishing companies… They review the artists. Artists upload music and a video to our platform and that goes to our judging panel. There are over 100 judges involved in the next awards and we’re having more industry curation into the categories. So, with Best Live Act we’ll have people from Coda, X-Ray, Live Nation, Primary Talent. They will be feeding artists into that category and then we have people from applications who will feed into those decisions as well. For example, Mullaly wasn’t on everyone’s radar at that point. You can find hidden gems. We don’t have any say who wins.

How many applications did you have?
4000 last year, with zero marketing spend. It was driven through social media and us going out and meeting artists, publishers, booking agents and everything else, and then submitting their artists. We are anticipating in excess of 10000 applications this year.

We have a bespoke platform. Some of our judges nominate themselves to be early adopters. Some just want to see the cream of the crop at the end. Its down to them. The judging is done over a month and some people are in there all the time. There is a review system in place to make sure quality comes through. That is the same for any platform, whether you’re applying for the Great Escape. It’s a quality control mechanism.

Tell me about next year’s event
We’ve got a new deal with Live Nation and as part of that deal we are becoming the opening ceremony for the Great Escape. We’ll be at the Brighton Centre, on Wednesday 16th May. We’re working with Live Nation, with Adam Hall (the main booker for The Great Escape), funnelling talent through, and really integrating ourselves with The Great Escape. They are the biggest festival in Europe for new music and we are the leading awards show in Europe for new music.

With the first show everything relied on us and it was much more difficult. We were still a start-up that hadn’t had an awards show. We were trying to convince people of our vision. Now, we have a case study and we have backing from the biggest promoter in the world, which gives it that wax stamp of approval.

Tell me about Nicole Arbour
We have a ‘social media influencer’, one of Facebook’s biggest stars, Nicole Arbour, She is from Canada, based in LA, and is a satirical comedian (and former cheerleader!). She has flown over to the UK to film content for us, and this will be going out on the Great Escape within the next month and other platforms. The angle we are taking now is that content, and the way that people absorb content now, is completely different. It’s more fast-paced, the engagement has to be immediate, and the people who have nailed that are bloggers. Our content has to be delivered in that way.

Any other plans?
We have a show every month, as of July, at the Hospital Club in London, to showcase artists to the industry. We are also doing showcases with Marshall Arts booking agency and events at Metroplis recording studios. We’re finding ways we can curate what we believe are the artists that should be looked out for, putting them in the spotlight and making sure the industry are there to see them.

We are UK-centric at the moment but we’re looking to expand internationally and have unsigned music awards in as many different territories around the world as possible.
Jeff Hemmings